The best books teach you things you never expected to learn! This book, Queens: A Culinary Passport: Exploring Ethnic Cuisine in New York City’s Most Diverse Borough, falls into that category. I did not know that Queens has such an amaze variety of food. I did not know about all the shops, all the variety and all the culinary walks and tours of Queens! Of course,  now I want to run and visit and eat. Andrea Lynn’s book has one more little secret — all the places mentioned are subway accessible so that when I visit, I dont have to take taxis or rent a car to enjoy all that Queens has to offer.

I requested Andrea to tell us a bit about her book in her own words:

There was a discovery I made while roaming around Queens, coaxing recipes from ethnic restaurants for my latest book, Queens: A Culinary Passport, which is a mashup of a travel guide and cookbook. Sometimes, what restaurants deemed as ordinary side dishes for their cuisine (boring, even) were anything but. Such was the case with the recipe for Sho-Go Khatsa (Aloo Dum). When trying to get tips from Himalayan Yak manager Gyaltsen Gurung on this potato recipe, he kind of shrugged and said, “It’s just cooked potatoes.” But it’s so much more than that, having moved up my recipe queue to become a favorite side dish. So much flavor is pumped into this that serving it with a tamer, albeit more boring main dish like sautéed chicken breasts brings a bit of uniqueness to dinner. Gurung also introduced me to Panch Phoran, a spice blend of seeds like cumin, nigella, black mustard, and fennel. It’s now my number one potato seasoner. 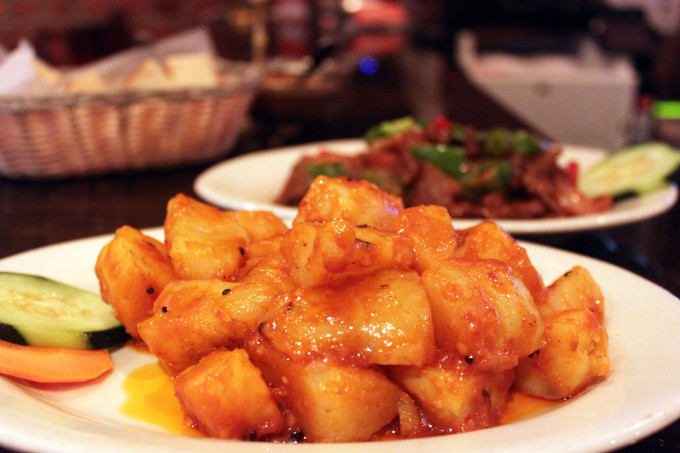 Sho-Go Khatsa (Aloo Dum)
Recipe adapted from Himalayan Yak Restaurant in Jackson Heights, New York.
2 pounds baby red potatoes
8 garlic cloves
8 to 10 dried chile de árbol peppers (or another type of spicy whole chile pepper)
1 tablespoon canola oil
½ teaspoon kosher salt
½ teaspoon ground turmeric
1 teaspoon Panch Puran (or 1 teaspoon cumin seeds or fennel seeds)
1 teaspoon black sesame seeds, for garnish
Add the potatoes to a large pot and cover with water. Bring to a boil over high heat and then add garlic cloves and chile peppers. Let cook until potatoes are just barely tender, when a knife poked into the potato is still just hitting resistance, around 12 to 15 minutes. At the 10-minute mark, use a slotted spoon to remove
garlic and chile peppers from the water, and place into a bowl. Transfer potatoes to a colander, saving about ¹/³ cup the potato water. Cool down the potatoes by running cold water over them for a few minutes.
While you’re letting the potatoes cool down so they can be handled, add the reserved chiles and garlic into the bowl of a food processor or blender. Purée until smooth, adding the reserved water down the feeder tube, just until chile sauce is a desired consistency.
When the potatoes have cooled, use your hands to remove the peels. Cut the potatoes into small pieces. In a large sauté pan or a wok, warm the oil over high heat. Carefully add the potatoes, and stir-fry until potatoes are soft, about 5 minutes. When the potatoes are fully tender, stir in the reserved chile sauce, salt, turmeric and Panch Puran. Let the sauce boil until it has reduced down to a sauce that coats the potatoes, just a few minutes. Garnish with sesame seeds and serve.
***** BUY NOW Queens: A Culinary Passport: Exploring Ethnic Cuisine in New York City’s Most Diverse Borough ****
Photo caption: Sho-Go Khatsa (Aloo Dum) at Himalayan Yak. (Photo by Andrea Lynn)
Bio: ANDREA LYNN, a southern-raised food writer, moved to NYC to attend culinary school and experience a diverse array of ethnic cuisine. After working at a restaurant and as a personal chef, she edited recipes for Art Culinaire and worked as senior editor at Chile Pepper, where she developed recipes for a spice-obsessed audience. Andrea now works as a freelance food writer and recipe developer and is also the author of the I Love Trader Joe’s College Cookbook. She lives in Astoria.