Let me start by saying that it took me many years to convert to eating brown rice (I converted only after I found brown basmati) and the only whole grain I used to eat was broken wheat (and yes, the occasional oatmeal). So when Maria Speck’s book landed on my doorstep, I was ready to give it a skip – me and whole grain? It was not a love affair that was going to happen. 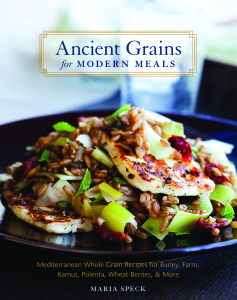 But, the cover of the book was gorgeous and I really like Maria’s work, so I opened the book. Some of the grains did not call out to me in spite of the amazing recipes but then I glanced at a recipe for farro with over roasted grapes. That sounded so good. But before I could try it, my neighbor borrowed the book and I never saw it again.

I began to hear amazing reviews of the book and thought I needed to really open it and read it and cook from it. So I did and am I grateful.

The book is filled with recipes that wont scare you away. Speck is a inviting writer. I never thought I would actually say that I like whole grains but after making a few of her dishes, I think I may just convert.

What I like about the recipes is that they are fun without being silly and really show the author’s deep knowledge of food. You will learn how to make a leek salad with halloumi and rye berries, barley with crisped prosciutto and truffle oil, Wheat berry fools with Grand Marnier Figs…. all just delightful features.

I am pleased to feature the recipe that has possibly ignited my love of whole grains:

“Reprinted with permission from Ancient Grains for Modern Meals

roasted grapes, and to finish

4 tablespoons honey, plus extra for serving

1 To prepare the farro, bring the water, farro, anise seeds, cinnamon stick, and salt to a boil in a heavy-bottomed 4-quart saucepan. Decrease the heat to maintain a simmer, cover, and cook until the farro is tender but still slightly chewy, 20 to 25 minutes. Remove the cinnamon stick, drain any remaining liquid, and return the farro to the saucepan.

2 Meanwhile, prepare the roasted grapes. Position a rack 6 inches from the heat source and preheat the broiler for 5 minutes. Spread the grapes on a large rimmed baking sheet. Drizzle with the olive oil and 2 tablespoons of the honey and toss to combine. Broil until the grapes just start to shrivel and release some juices as they burst, 5 to 7 minutes. Immediately transfer the grapes with their juices to a heatproof bowl.

3 To finish, add the cream and vanilla extract to the farro and bring to a boil over medium heat, stirring frequently. Cook until the cream thickens slightly, 3 to 5 minutes. Stir in the remaining 2 tablespoons honey, add the grapes with their juices and cook just long enough to reheat the fruit, about 2 minutes. Divide among bowls, sprinkle with cinnamon, and serve warm with more honey on the side.

to get a head start: Make the farro, as in step 1, ahead (see page 25). The grapes can also be roasted 1 day ahead. Chill, covered.

to vary it: If you like a bit more chewiness, try other berries from the wheat family such as spelt, Kamut, or soft whole wheat. You will need a scant 3 cups.