My friend, Ramin Ganeshram, has a brand new book releasing in a few days — FutureChefs! The book has a collection of wonderful recipes from kids around the US and the world. My own kids want to cook from the book. The recipes are ethnically diverse and very accessible. Please join me in congratulating her! 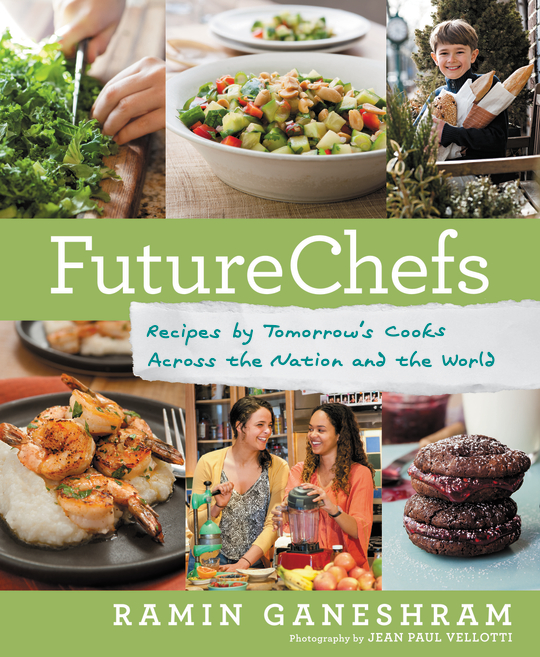 The following is an adapted excerpt of the introduction of my forthcoming book FutureChefs (Rodale, Oct 7 2014)—Ramin Ganeshram

Four years ago I wrote what I thought was a fantastical piece of fiction about a 13-year-old chef who gets to compete on a competition cooking show on Food Network. Based on my own youthful fantasies of becoming a famous chef, I thought my premise in the middle-grade novel, Stir It Up!was a neat bit of storytelling and nothing more.

But soon after the book was published, I found out how wrong I was. I started receiving emails, letters, tweets, and Facebook posts from kids who told me they were “just like the main character” and that they felt like I had told their life story in the pages of my book.

At first, I thought nothing of this early fan mail. The book, I thought with satisfaction, had found its niche. It wasn’t until months—and then years—passed with letters still coming in that I started to really pay attention. Maybe these kid-chefs weren’t a niche or an anomaly. Maybe they just were.

I decided to test this theory out and do a little digging. Were kid-chefs really that common? One of the first responses I got to my queries was from Alison Catanese. Her niece, Georgia, had turned her life-long love of cooking to practical end when her mom died the year before and her dad suffered a stroke 2 months later. Georgia was 11.

I heard from the mom of young Tyler Trainer in Florida who was also 11 and couldn’t get enough of being in the kitchen. His mom wasn’t sure why because neither she nor her husband liked to cook. When I read the fracas of recent weeks about the “tyranny of home cooking” and the “resentment” felt my moms in the kitchen, I immediately thought of the Trainers. Mom doesn’t have to cook because her very skilled kids can and want to. They are who we must watch when it comes to the future of scratch cooking, not the adults.

One young man, Rusty Schindler, spent the summer of his 16th year building a brick oven in his parents’ backyard so he could bake bread with the wild yeast starter he had been keeping for a few months.

Young Eeshan Chakabarti was the pickiest eater around—until he got on a step stool and started cooking for himself at age 6. Then there was Jack Witherspoon who cooked to keep his mind off his leukemia treatments. Jack was 10 then. Since then, the 13-year-old has been on The Tonight Show, a contestant on Food Network’s Rachael vs. Guy, and the author of his own cookbook. And Samantha Pecoraro who is 16 can’t even eat what she cooks, because of a rare medical condition.

The more kids I spoke with, the more stories emerged—too many to ignore as a passing fad. FutureChefs was born.

As I wrote this book, telling the stories of these young chefs, they became the teachers and I the student. I learned that while all are impressive, none is that unusual. Like their peers they are being raised in a food-aware world where whole ingredients, respect for the earth and environment, and the desire to explore beyond their physical borders is the norm. These kids are vegetarians, farmers, travelers, activists, healthy eaters, and compassionate thinkers. And they are not alone.

At first blush, it’s easy to discount these young people as unusual in some way—oddities in “size small” chef’s jackets or farmer’s overalls—but nothing could be further from the truth. FutureChefs is just a taste of a vast network of people 18 and under who are poised to change the way we as Americans and as members of the international community think about, cook, and consume food.

Yet, what the Future Chefs taught me more than anything was a lesson in resilience. Hearing the stories of remarkable young people who cooked their way out of adversity, illness, prejudice and bullying set me straight about a lot of things—not the least of which is that persistence and passion—regardless of the area—are as necessary as lifeblood in order to go on.

But why should you care about a bunch of kids in the kitchen?

Because more than anything, perhaps, these young chefs are the leaders of a new tomorrow. Consider them the forward flank of a changing American food scene that reflects the color and fabric of what we call our “national” food. Their love of real ingredients, their willingness to experiment with multiethnic flavor profiles, and their eye toward food justice and other issues of food reform are but a glimpse into a culinary future that they are changing with every step forward into tomorrow. 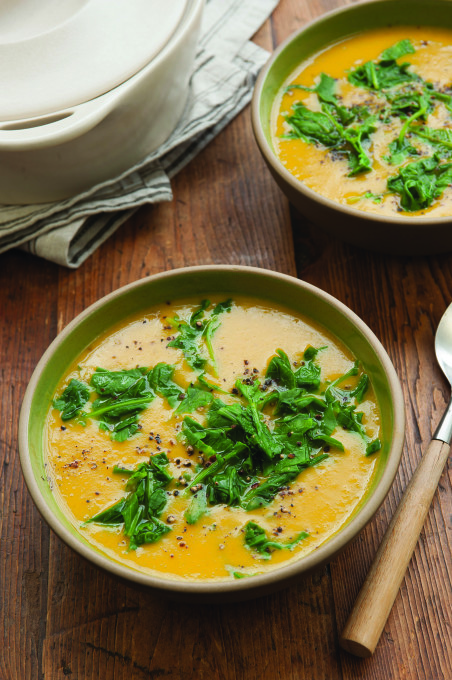 This 15-year-old crusader focuses his talents on helping the poorest residents of his city access fresh produce. Karthik, who attends an academy for extremely gifted children in Reno, first focused on feeding those less fortunate as a grade schooler when, during Halloween, he passed on the candy and asked, instead, for money and canned goods to donate to the Food Bank of Northern Nevada. On one of his weekly food drops to the organization, he realized that fresh produce was never among the foods distributed to those in need of the service. In January 2011, Karthik enlisted the help of advisers from his school to create Farm Fresh For Kids whose goal is to fight childhood obesity and obesity-related illnesses by providing access to fresh food via farmers’ market vouchers and nutrition education through low-income clinics in his area. In 2013 he presented a TEDTalk in Reno about the initiative. A vegetarian for sustainability and health reasons, Karthik, who calls himself a “passionate environmentalist,” is dedicated to growing foods in his home garden and experimenting with them to come up with new recipes, such as this butternut squash soup.

Smooth and creamy without the use of cream or milk, the soup can be made vegan by substituting coconut oil for the butter in the recipe.

2. Halve the butternut squash lengthwise and scoop out the seeds and any loose fiber. Lightly coat the cut faces with the softened butter. Place cut side down on the baking sheet and bake until a knife goes through the skin easily, 1 hour to 1 hour 30 minutes. Let the squash cool completely, then scoop out the flesh and set aside. Discard the skin.

3. In large, deep saucepan, eat the olive oil over medium heat. Add the onion and cook until translucent, 3 to 4 minutes. Add the garlic, thyme, and parsley and cook for 1 minute more.

4. Add the flour and cook, stirring, for 1 minute. Slowly add 2 cups of the stock, stirring constantly. Add the baked butternut squash and stir well. Stir in the remaining stock and simmer for 10 minutes. Remove from the heat

6. Return the pureed soup to medium heat and bring the soup to a boil. Add the kale, salt, pepper, and brown sugar. Simmer until the kale is tender, 5 to 10 minutes. Serve hot. 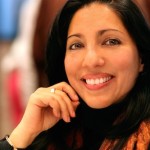 Ramin Ganeshram is a journalist and professional chef trained at the Institute of Culinary Education. She is the author of Sweet Hands: Island Cooking From Trinidad & Tobago (Hippocrene NY 2006; 2nd expanded edition 2010) and The Pass It Down Cookbook (Smiley Books/Hay House 2010) (with Jeff Henderson) and Stir It Up (Scholastic 2010) about a teen who gets the chance to fulfill her dream of competition cooking on the Food Network.

In addition to contributing to a variety of food publications including Saveur, Shape, Gourmet, Bon Appetit and epicurious.com, Ganeshram has written food/culture/travel articles for Islands (as contributing editor); National Geographic Traveler; Forbes Traveler; Forbes Four Seasons and many others. She is a contributor to the Encyclopedia of World Foods (Greenwood Press 2010) and award-winninge Oxford Encyclopedia of Food & Drink in America.

She has appeared on Food Network, Travel Channel, CNNfn, Good Day New York, the OWN network and other television programs, sharing her culinary expertise.