The Jewelled Kitchen   is a book that I fell in love with quite by chance.  I was sitting at the home of a friend and this book was on her coffee table. I began to read through the gorgeous book and it took me back to my childhood spent in the Middle East. Beautiful dishes from Middle East and Northern Africa grace the pages of this must-have collection. Dishes include —   Tuna Tartare with Chermoula and Sumac-Scented Chicken Parcels, to Cardamom- Scented Profiteroles and Ma’amoul Shortbread Cookies. A few months after I found the book, I ended up meeting the author, Bethany Kehdy in London at a blogging conference she organizes. I was one of the speakers. Bethany also did a signing of her book at the conference and we were treated to some of the dishes from the book. A promise kept – great recipes that taste delicious. I picked one here that my family loves and is just perfect for this warm weather we have been having. I hope you will enjoy it. 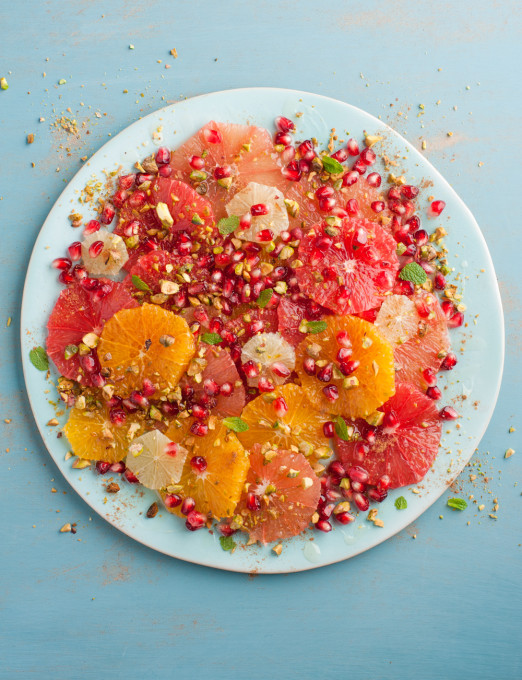 Citrus salads, whether sweet or savoury, are very popular in Morocco. As in many parts of the Middle East, most meals
end with a vibrant array of seasonal fruit: ruby pomegranates, oranges, apples, grapes, loquats, bananas … It’s hard to provide a recipe for such a basic salad since it really should come about by following one’s instinct and mood, so regard this as more of a suggestion than a hard-and-fast recipe: it’s now up to you to bring it to life in whatever way you choose. If you want to attain more savoury notes, add thin slices of red onion, a creamy cheese, olives, a dash of paprika and a drizzle of argan oil. The combination of fruits and vibrant colours will revive you at first glance, let alone at first bite. Serve with some ginger yogurt, if you like.

1 Using a sharp knife, trim the top and bottom of the lime so that
the flesh is revealed. Keeping the lime upright, cut through the peel downwards from top to bottom, following the shape of the fruit, making sure to shave off all the peel and pith. Turn the lime onto its side and cut into thick wheels (not too thick, but thick enough so they are not falling apart).

2 Repeat with the remainder of the citrus fruit. Remove the pips and arrange the slices on a serving plate, so they overlap. Drizzle any juice over the citrus slices.

3 Sprinkle over the pomegranate seeds and pistachios. Put the honey and orange blossom water, if using, in a small mixing bowl and stir well, then drizzle it over the citrus fruits. Dust with cinnamon and sprinkle the mint over the top.

4 To make the ginger yogurt, if using, put the yogurt and ginger in a bowl and mix well. Serve with the salad. 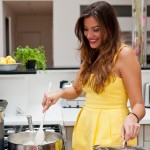 Bethany Kehdy is a Lebanese-American food explorer most notably known by her popular Middle Eastern food blog, Dirty Kitchen Secrets. Born in Houston, Texas to an American mother and a Lebanese father, Bethany grew up in Lebanon during the country’s most volatile civil war years.

To shelter from the war, her family retreated to the mountains of Lebanon where her father set up an eclectic farm on the ancestral land. For a great part of her childhood, Bethany helped to water orchards, harvest fruits and vegetables, chase after chickens, make cheese, and even milk the odd cow.

After competing in Miss Lebanon 2001 and proudly representing Lebanon in Miss World 2002, Bethany traveled the world and built a career around her enthusiasm for Middle Eastern food. Bethany has spent the last 5 years heating up the kitchen and establishing herself as the most provocative Middle Eastern cook online, bringing together her childhood memories of traditional Middle Eastern cuisine and interpreting it in a fresh, modern approach, all the while incorporating her well-traveled palate.

Bethany’s debut cookbook on Middle Eastern cuisine entitled The Jewelled Kitchen (Duncan Baird Publishing) was released on July 4th in Europe, the Middle East and Australia. It was selected as Cookbook of the Week by The Telegraph and featured in The Times.

In 2010 Bethany launched Taste Lebanon culinary journeys across Lebanon and in 2009 founded Food Blogger Connect, the world’s leading international food blogging conference. Bethany lives in the West Country of England with her British husband and splits her time between Lebanon, England and the rest of the world.