Skip to Content
Home Writings Food Writing E-Course Is the writing dream over?

The publishing industry is in the middle of a great transformation, a great change. And change, good or bad, is difficult. There are slews of stories right now on how hard it is to make a living as a writer.

I have been getting emails from my students, friends in the industry, and many readers, all with the same theme: is the dream over? Will being a writer ever be a viable way to make a living?

I wish I had the answer. I have been on both sides with my new writing career: I have had years where the money has rocked and years that the money has kept me under the poverty line.

I will come clean and let you all know that a year or so ago, this downturn hit me hard. I was so scared and could not move forward. It is then that I decided to interview women who were succeeding and see how they were doing it. The interviews morphed into an e-book and I learned so much from all of the women who spoke to me. (If you read this whole post and leave a comment here with your insights and experience, I will send you the ebook for free

. It is truly motivating.)

What I learned is this: what paralyzed me was fear. I was (and sometimes still am) so afraid that this industry will fail and that I will fail that it has stopped me cold in my tracks. I stopped writing. I stopped pitching and shamefully, began to whine to anyone who would listen.

It is hard to have faith sometimes that it will all be okay. Magazines I wrote for are gone, rates are dropping, chasing invoices has become the new norm.

But I learned that if I was going to succeed and make my writing dream come true I had to do this: Write because I love it. Write consistently. Write persistently and never, ever, ever give up.

Recently I came across a book, Be Fearless

, that I fell in love with because it addressed the issue of fear head-on. It talks about how fear can be paralyzing but it does not stop there. In simple, easy to understand language, the author guides the reader into creating our new reality: a reality that is happy and not depressing.  I had the chance to ask author, Jonathan Alpert, some questions and you can read his insightful interview below.

And while the reality is that publishing is hard, here is another side: in the last six months: a new food writer has signed a six-figure deal for an innovative cookbook, a aspiring blogger gets high six-figures to sponsor a product she loves, a food writer has signed a deal to write three novels. So, yes, people are still doing it and still succeeding.  So the question is what are you going to do?

There are many knocking at our door, and what we chose to do will create our reality.

Here is my interview with Jonathan Alpert, author of BE FEARLESS

1. I am really loving your book. I think it came along at just the right time for me! I specially love your concept of – Five Steps to the rest of your life. Can you tell my readers a little bit about that? 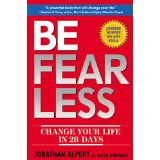 The five steps are the heart of BE FEARLESS and come from my practice.  It represents what has made countless clients hugely successful.

Briefly, these are the steps:

Rewrite your Inner Narrative: in this step readers become aware of the thoughts that have held them back and caused them to doubt their abilities.

Eliminate your Fear Response: in this step you’ll overcome the physiological response to fear and turn it into a strength.  You’ll gain control over the things you once thought were beyond your control.

Live your Dream: in this final step you’ll craft your Fearless Action Plan and embark on your plan.

2. We all tell ourselves our little stories on why we cannot accomplish something.. and we do it so well! Can you give us some advice on how to stop doing that and basically change what we are saying to ourselves? And once we tell ourselves a different story… what really happens? Will things start to get better? Why?

We are programmed and primed to think worst case scenario.  It goes back 1000s of years ago when thinking negatively or being hyper-vigilant served us well.  Matter of fact, it often led to survival.  We anticipated danger and were able to then handle it if it occurred.  So, to stop that thinking people can think of alternative explanations to a situation – create a new ending.  Re-frame information.  On a piece of paper draw a line down the middle.  On the left write the negative self-defeating statement / language – and on the right side write down a re-frame.  For example, let’s say a guy who is afraid to approach a woman thinks, “She’ll never go for a guy like me”  “She’ll think I am dumb and unattractive.”  This might be re-framed by thinking, “Sure, it’s an anxiety provoking situation because I don’t know the outcome – and I certainly don’t know if I will be rejected or not.  This is a great opportunity to try and get to know the woman”.

3. In the publishing industry, where many of my readers reside, things are very difficult right now. I know a lot of writers are paralyzed by the fear that the industry is failing. Money is tight, work is hard to find. This is the reality. How does one deal effectively with this reality without letting it take over?

Sure, the publishing industry is tight right now, but there are still articles being published, books coming out, and people surviving – focus on these things rather than the negative.  Adjust expectations to fit the times.  If you expect to get rich off being a magazine writer, then you need to reevaluate your thinking.  Do know that not trying to even land something will ensure that you don’t land any gigs – but trying could potentially lead to something.  Pitch many, land one!  One of my favorite quotes is by baseball legend Babe Ruth. He said, “Every strikeout brings me one swing closer to a home run.” – Remember this – it’s powerful.

4. I love that you say ” You are capable of doing more than you ever dreamed” and I would love for you to elaborate a little on that.

You are capable of doing more than you ever dreamed – for most people, they don’t even begin to embark on their dreams because of fear.  They think of all the reasons why they can’t, won’t, or shouldn’t pursue something.  That type of thinking keeps you right where you are now: stuck.  The moment people start to think about why they can, should and will do something, it changes things dramatically.  They move from being a victim, or feeling stuck – to being in a position of power, to being in the driver’s seat, to being in control – and that makes all the difference in the world as they pursue their goals and dreams.

JONATHAN ALPERT, a licensed psychotherapist and advice columnist, is one of the media’s favorite sources of no-nonsense lifestyle advice, quotes, and commentary. The New York Observer has called him “Manhattan’s most media-friendly psychotherapist” and “the media’s go-to guy for psychoanalyzing the City.”

His book BE FEARLESS: Change Your Life in 28 Days

was published by Center Street / Hachette on April 24, 2012. The book is written with Alisa Bowman.. a superbly talented writer whom I greatly admire.