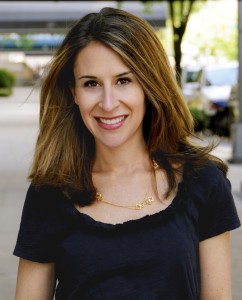 This week is face your fear week here at Life of Spice. My first post received some amazing and honest comments: Is the writing dream over.

In the spirit of facing our fears and doing it well, here is my second post… Trust me Allison will make you want to write.. NOW.. and without fear:

I met Allison Winn Scotch several years ago on an online writing board. She was dynamic, funny and prolific. If it were school, I would have said that Allison would have been voted as “Most Likely to Succeed” by the writing group and I would have been right. This lovely lady who started out writing magazine articles went on to write a New York Times best-selling novel and more.

Allison has just released her third book, The Song Remains the Same,

and it is already getting rave reviews and I am sure it will hit the NYT best-seller list like her last one did. I just ordered the book and while I wait for it, I asked Allison if she would address a fear that I know I face and a number of my readers do as well: A fear of fiction. And, as gracious as she is, she agreed.

So here is Allison, in her own words: 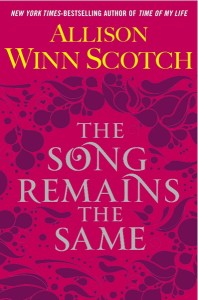 Fear is part of the process. And I’m not here to tell you that it’s not.

I have written four published novels. (And one truly awful unpublished one.) Every time, I am nervous and every time, I find something new to worry about. (Fortunately, I also learn from experience and realize that there are plenty of things that I once found terrifying that I no longer do.) Fear is not the reason why you don’t write a novel. Because if that’s the case, you will literally never get it done. Here are a few things that you might worry about, and how, in my opinion, you can overcome them.

1 – Your fear that you’ll write it, and it will be terrible.

Well, here’s the truth: you might write it, and it might actually be terrible. There is no guarantee that just because you want to do something, be a novelist, etc, that you will actually be good at it. Honestly. That comes from a loving place. There are millions of people out there who think they can write the next great novel, and only about two of them do, so that gives you some insight as to the odds that you are the next Hemingway. And to that, I say: SO WHAT. Write you novel. If it is terrible, a few things will happen: 1) you’ll discover that your dream of becoming a novelist might not happen. This might be gutting, but it also might be in many ways freeing. Writing fiction is a very specific craft, and that doesn’t mean anything about your other writing. 2) The writing process in and of itself might be the most educational thing you’ve ever done. That is what happened to me. I wrote a stinker of a novel, and it got me an agent but it didn’t sell. (Thank goodness!) But you know what else it did? All of my blood, sweat and tears taught me how to write a BETTER novel. One that DID get published. So many times a first novel is a stepping-stone. Just as so many other first things in life are a stepping-stone. Be okay with that, and then the fear can dissolve.

See above. The best thing that ever happened to my career is that my first manuscript didn’t sell. I would have been judged on something that I wrote when I had no idea what I was doing, and I never, ever, ever would have been given the chances that came after it. Is it absolutely demoralizing to get those rejections in? OF COURSE IT IS. The question then becomes, can you overcome your fear of further rejection and keep writing or do you quit? If you quit, then that is totally fine. (I mean it.) A thick skin and solid backbone are two of the surest requirements for this job, and it is probably better to know that you can’t handle it early on. (I really, really mean this in a super-kind way. You can’t always tell that from the internet.) If you don’t quit, I can promise you that your next book will be better. (Even if you don’t believe me now.)

3 – Your fear that you’ll be letting yourself down.

This is a complicated one because writers are often complicated people. In the back of many writers’ minds is a voice that is questioning whether or not they are good enough, not least because so often, we are told that we might not be, whether it’s by an editorial rejection or an agent rejection or a whole slew of other rejections that come our way. And it can be terribly demoralizing to think that your creative work – the one that you and you alone cultivated to life on what was once a blank page – doesn’t cut the mustard. (Forgive the food metaphor.) And how you deal with this fear is up to you. I, personally, am okay never take rejection personally, so that angle for me is pretty easy to walk away from unscathed. If someone doesn’t like my book or an editor doesn’t want to buy it or whatever, I always assume that it’s them, not me. (I know, I know, what an ego!) The harder thing for me is when I’ve written something that I’m not crazy about – THAT is when I feel like I’ve let myself down. The good news is that you can always improve, so this fear is one that in my case is easy to fix, IF I put in the work. This means that I don’t stop revising until my editor tells me that I’m done, that I read authors I deeply admire to hone my own craft, that I don’t rest on my laurels over the fact that I’ve published four books. What this means for you is probably different. But again, I’ll go back to my first point – if you write something, and it isn’t great, well, then, so what? At least then now you know. If you never write it, you will never know, and then, you’ll always wonder. It’s actually that simple.

4 – Your fear of trying something new.

I can’t personally speak to this one because I am a gemini who thrives on change. (This is a self-diagnosis, not a clinical one.) 🙂 (Also, I really don’t believe in that astrological stuff, but sometimes, it’s an easy short-hand!) But a lot of people say they want to break out of their ruts but actually find a lot of comfort in that same rut. If you don’t take a chance, you also don’t risk failure. And that risk is scary enough to keep you from trying. Here’s the deal though: if you want it badly enough, you HAVE to risk that you will go down in flames. Sure, there is something wonderfully comfortable about your old patterns,  your old job, whatever. But guess what? No one else will write this book for you. If your desire to be a novelist is stronger than your inertia, then you’ll overcome this one.

5 – Your fear that people will judge you.

They will. It’s that simple. They will mistake your characters for you, they will call you a terrible writer in their Goodreads reviews. They just…will. Be okay with this – think of it as noise that you eventually learn to tune out. Eventually you will. Four books later, I’m rarely bothered by any of this. Readers read your books, and they form an opinion. That will never change. Once you accept this, you can pick up that fear, set it aside, and start writing your next novel.