Skip to Content
Home Writings Once Upon A Story... "Moving forward like a shark" Katie Workman is in the house!

a while ago so that it would be timely. There was only one problem. I had a hard time getting it out of my kitchen! It has been a long time since I have enjoyed a book so much (most recent love of mine is Debbie Koenig’s new book – Parents Need to Eat Too

, is a smart, user-friendly collection of really good, solid recipes. The book is filled with useful tips and what I specially liked was her approach on how to get kids involved in the kitchen. 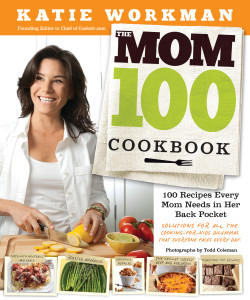 I was so impressed, I asked her if she would pen a post for me on how to get kids to eat a larger variety of foods and she was kind enough to oblige. Here we go….such a lovely piece:

You may remember from biology class that if a shark stops moving forward, it dies. That’s a bit morbid, and maybe not even entirely true, but I think of this often when my kids are being ornery about trying something new, or re-trying something they have convinced themselves they don’t like. It might not happen today. It probably won’t. But that doesn’t mean I don’t have to try again. 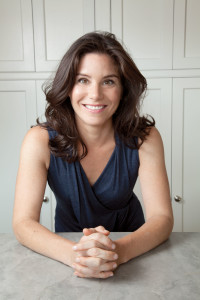 “What if you never tried ice cream?” I reason. “Can you imagine what you would be missing if you hadn’t given that a shot?” This is a shaky argument when a scallop is congealing on a plate, but I give it a go anyway.

{And before I go on, let’s duly note that a) not everyone likes everything, and it’s perfectly fine to have foods that aren’t your thing, and b) there is a whole boat of scientific evidence that says that — for reasons too long to go into in depth here — kids’ palates are more sensitive to different tastes than grown-up palates, and certain vegetables in particular fall squarely into this category.}

A tactic you might try employ is the “Fork in the Road” tactic. This is when you make a dish up to a certain point, then separate out part of it out keeping it on the simpler side, then keep going with the recipe, adding more seasonings, maybe a little spice, a little heat, so that the final dish is something that the more adventurous eaters at the table can enjoy. And then you are going to offer the more fully seasoned dish to everyone, and if your wee ones balk at the capers, there is a nice sauteed chicken breast for them, and you’ll offer it again another day. This way you are all basically eating the same meal (nice), you are not making three different dinners (unacceptable), and you’re not sighing and pulling out a box of frozen chicken nuggets (defeating). But don’t assume your kids won’t like something; this becomes a self-fulfilling prophecy in most cases.

In this dish, fresh chicken is lightly floured and sautéed and then a simple pan sauce is created with some shallots, garlic, white wine (the alcohol burns off in the cooking process), broth, lemon juice, and capers. It’s fast, it’s simple, and it’s a nice introduction of bright new flavors to a family dinner. And if tonight is not the night, you’ve got real sauteed chicken to fall back on.

And tomorrow night, there will be a whole new chance.

Recipe and photo courtesy of Workman Publishing. From “The Mom 100 Cookbook 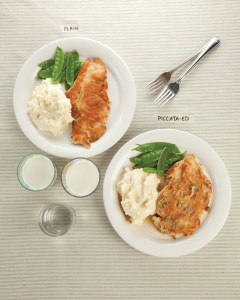 This is absolutely one of my fallback dishes for entertaining families when I don’t know how finicky the kids’ palates are. My kids usually eat the grown-up version but occasionally one of them has a relapse of sorts and declares the sauce (which he loved the week prior) to be unfit for human consumption. Suddenly the simplified version of chicken breasts and rice or potatoes with no sauce is all he will touch. This is exactly the kind of flexible option that doesn’t make the cook (aka you) nuts and vaguely irritated since you will make one dish, just one, that allows the blander eaters to enjoy the meal without rendering the adults bored out of their skulls.

Note: To pound chicken breasts place them between 2 pieces of plastic wrap and use a rolling pin or a mallet to firmly but gently pound the breasts until they are about 1/2-inch thick throughout.

Fork in the Road: Any amount of chicken can be removed from the pan before it gets all sauced up, so whoever wants a plain piece of chicken will get one. Cook them through for about 4 minutes on each site and set those breasts aside on a different plate. Keep warm.

Cooking Tip #1: So you can either pound the hell out of some chicken breasts or buy thinly sliced chicken cutlets and save yourself the whacking. Having said that, if you were to make this with regular skinless, boneless chicken breasts without pounding them this, that’s very fine, too. Just cook the thicker breasts for about 5 minute on each side and make sure they finish cooking all the way through without the sauce. It’s nice to slice the chicken on a diagonal before serving since most kids won’t tackle a while chicken breast, and it just looks very appetizing in general.

Cooking Tip #2: You don’t have to add the little bit of butter at the end, but it pulls the sauce together deliciously, adding flavor and silkiness. And two teaspoons of butter is negligible when divided among six people, so no stressiness there.