Skip to Content
Home Writings My Writings Does ethnicity matter?

I thought it would only be appropriate to have a French meal as a precursor to a culinary trip to France. So I called a dear friend, a trained chef, to ask he would prepare a meal for me that would open up my appetite for France. My kind friend obliged.

I sat in his warm and comfortable kitchen watching him passionately dole out dish after French dish.

We started with a sparkling consommé. As my friend poured some and garnished it with chervil, he explained the process of making it: “This consommé really is a rich broth. You know, the secret is to clear out the raft of egg white, mirepoix and meat that forms on top of the simmering broth in such a way that we leave no particles behind. After straining, the broth must be crystal clear.” It was, and so rich tasting I did not even think I needed another course!

Lobster Thermidor, another French classic, was served in lobster shells. As he laid out the dish, I could see his eyes twinkle—you know, that twinkle when you know in your heart you’ve nailed a recipe. “All French cooking is really about learning to make the sauce. The more perfect your sauce, the better your dish will taste,” he told me, and went on to rhapsodize about the five French “mother” sauces and the secrets to making each of them à point. We kept eating as he showcased dish after dish.

It was some of the best food that I ever ate. Decadence on top of French decadence.

And now, the moment of truth: My friend, Chef K.N. Vinod, is Indian, not French. Does this make his cooking any less French? Less authentic? Less amazing? 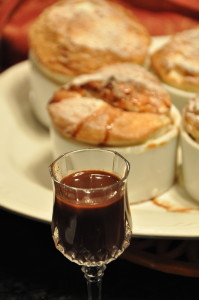 A few days after that dream dinner, I was in a taxi in Paris on my way to learn French cooking at a local school. My driver, a born and raised Parisian, was thrilled when I told him I write about food for a living (which I sometimes feel is like telling people I am a therapist, as they then feel compelled to share their opinions). “I hate to eat out in Paris now,” he confided to me. “There are no French chefs cooking anymore. All the food is being cooked by immigrants, all these Indians, Turks and—” And he stopped, realizing perhaps that I am Indian. But his story reminded me of an incident at an Indian restaurant in Maryland. An Indian lady arrived at the restaurant, which boasts an open kitchen, saw all the Hispanics and other non-Indians cooking and left in a huff as the place was not “authentic.”

In this global world, it is hard to keep up, especially when it comes to food and cooking. There are over 50,000 food blogs; I’ve lost count of how many cookbooks I get each week to review and how many cooking schools are popping up all over the world. We all want to learn to roll pasta like an Italian nonna, to make a tomato-coconut curry like a Goan, to perfect a béchamel sauce like a true French cook.

One of my favorite chefs in Washington, DC makes the most authentic Chinese food I have ever tasted. I’ve traveled around the world and always find myself comparing the Chinese food I eat to his—and his food wins hands down. But he is not Chinese, not by a long shot. Scott Drewno was born and raised in upstate New York. And he learned to cook Chinese food from . . . Austrian chef Wolfgang Puck.

“I love the multifaceted aspects of Asian food: There is so much texture, flavor. It is not flat and one-toned like some other classic cuisines. I love combining the salt, sweet, savory and sour flavors to create dishes,” Drewno tells me as I eat his perfectly cooked and spiced quail.

I get up the nerve to ask him if ethnicity matters.

He looks concerned, as do many chefs when I ask them this question. But he answers: “It is complex issue. I think there are so many things that matter, but I do believe that a cuisine can be learned. My motto is one I got from Wolfgang: Use good ingredients and don’t screw them up.”

Clearly, Scott has broken the barriers of ethnicity, a Caucasian cooking great Chinese food. I am happy to learn that he is not the exception, but rather a growing trend. There is a Guatemalan chef making sushi in DC, and according to reports, doing it very well.

Let us for a minute assume that the ethnicity of the chef is critical to making a dish; do I then infer that all those books promising to teach me to make pasta like an Italian grandmother should be filed under “false advertising”? Or that the cooking school offering to teach me to cook like a native Parisienne is nothing more than a month of fun and frolic? Can authenticity in cuisine not be learned?

I grew up with the notion that good food is born of the hands of a good cook, someone who understands ingredients, understands that controlling the fire controls the food and is immersed in the culture that they are cooking from. My Indian friend can make authentic French food because he was trained by a French chef; he can also make authentic Indian food, not because he was born Indian but because he learned that art as well. I believe an understanding of the culture whose cuisine you are trying to replicate is critical to authenticity of any dish; being born in that culture is merely incidental. The culture teaches you the cuisine: you need Arborio rice to cook risotto, basmati will not do; cayenne and paprika are two different animals; “sauté” means something totally different to the French than to American home cooks.

In my heart I believe that recipes belong to the land: authentic ingredients can become miracles in the hands of a trained and passionate cook. The ethnicity of the ingredients, not the cook, is what matters.

Here are more of the chefs who responded to my question:

New York native Chef Cornelius Gallagher, who cooked at Daniel and Oceana, has won many awards for his work. He is getting ready to open Dragonfly in New York city, a restaurant that will showcase Asian-American fare reflecting his recent travels and culinary experiences.

In this global world, does the ethnicity of the chef matter? I think what matters is the chef’s experience and not necessarily his or her ethnicity. In every country, there are good cooks and there are bad cooks.

What does matter? Travel, passion, training, ingredients . . . all of those? If you lived in India and ate their food extensively, this would help a great deal. . . . [Y]ou would understand their culture, tradition, techniques, ingredients, etc. It all comes down to experience . . . and execution.

Chef Joseph Elevado, executive chef of Livello at L’Ermitage Beverly Hills, is a Filipino American cooking free-form Italian-Asian cuisine. Prior to his role at L’Ermitage, he trained in Japanese cuisine under Nobu Matsuhisa for more than ten years.

What does matter—recipe, technique, training? What matters is the connection the chef has with the culture of the cuisine. If they can feel the culture, they can grasp the cuisine. Of course, this is not the golden rule, but generally speaking I believe this is true.

In this global world, can anyone learn to cook any cuisine? I don’t think that just anyone can learn to cook any cuisine, because it has to start from the heart, and inspiration has to come from there as well. I’ve met many cooks in my career and there have definitely been those who lacked the heart and inspiration to truly grasp a cuisine’s soul.

Chef Troy Guard has two restaurants in Denver, TAG and TAG Raw Bar. Troy learned Japanese food from Roy Yamaguchi, with whom he studied for eight years. Although Troy is not Japanese, he prepares Japanese food at TAG—sushi and sashimi, and offers an omakase menu along with pan-Asian dishes. Troy calls the food at TAG “continental social food” because it’s a combination of his Hawaiian roots, his pan-Asian experience and fresh local Colorado ingredients.

Does the ethnicity of a chef matter? Can only a Spanish chef cook great Spanish food? I personally do not think the ethnicity of a chef matters. Sure, it may be useful and easier growing up with your parents, your grandparents, or the surroundings of, say ,China, but in the end I believe it is what you put into it. I’m white [Caucasian] as can be , but I lived in Asia for eight years and studied under Roy Yamaguchi to learn and understand different spices, produce, techniques of cooking. It’s all about practice and learning.

(for a superb take on this issue of chef ethnicity, please read Francis Lam’s wonderful article on the topic in The New York TImes)