My first meeting with him was supposed to be a 45-minute interview for the New York Times. I was writing my first-ever feature for a newspaper and he was my first-ever superstar interview. We met in his office. To say that I was nervous would be an understatement. I was a rookie writer talking to one of India’s biggest superstars. How big? His cooking show, Khana Khazana, is the longest running show in Indian television history; it’s viewership? 500 million people at last count.  He has over 140 cookbooks. Yes, read that number again – 140. (Includes all the regional language translations of his books.) This was six years ago.  His gracious wife Alyona joined our interview session. They answered my questions with grace and elegance.  The 45-minute interview lasted for four hours.

Sanjeev Kapoor is, and will always be, my Indian idol. (PS: Modern Spice readers: I wrote an essay on him in my book

Today, I want to tell you why.

When I first met him, I was awed but not for the reasons you think. Yes, he was a superstar but what awed me was this humility he seemed to have around him. It was (and always has been) as though he is unaware of who he is. His simplicity of manner charmed me. I think out of the four hours we spoke, we laughed hysterically for at least half that time.  He wears his success as though it were an old friend, he shares his dreams as though they are little pieces of candy, just waiting to be picked up. Every time I meet him and speak with him, I walk out of the room feeling like I can achieve anything, like the world is my oyster. There are very few people who can make you feel like that. As though the world is there for your taking and all you have to do is extend your hand.  I have had the honor of interviewing him several times since and we have talked about mutual projects, family, weather, and everything else. The world could be coming to an end, and he would be saying, “Relax, you have the ability to change things. You can do it. I believe it.” Faith is a big thing.

This week is big for Chef Kapoor. He has launched India’s first ever full-time food channel. Go back and read that line again.

Food channel. Not show.  With over 40 syndicated shows. It will run 24/7. Name one chef in the world who has been able to do that.

And yet, when I first asked him about it and how hard it would be (it is a task of monumental proportions), his answer: as always, a smile and a nod of the head: You have to believe it will get done and I believe this channel will get done.

And guess what? It went live this month.

Today, is a special day for me. I have the honor and the privilege of introducing Chef Sanjeev Kapoor to the readers of Food & Wine magazine in a story on him and his recipes in their March 2011 issue. I am thankful to the magazine that they gave me the chance to write the story. It is much more than a story for me. For me, it is a way of honoring a truly inspirational human being.

And to Sanjeev Kapoor, I say this:  This is only the beginning of your ride to glory. And Sanjeev, this I believe.

Read the Food & Wine story online, on the iPAD (to watch him cook) or run out now and buy the March 2011 issue and try Chef Kapoor’s recipes. 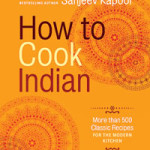 In Spring, Chef brings his Indian cooking lessons to the US in his upcoming book – How to Cook Indian

Use Yukon gold potatoes for best results. I have used this many times as a filling for Indian-style sandwiches. The original recipe calls for deep-frying the potatoes after boiling them. I have avoided that step here, but the taste is still wonderful. The recipe is adapted from Best of Chinese Cooking

Bring lightly salted water to a boil in a saucepan.

Peel and cut each potato into 8 to 12 wedges each. Boil the potatoes until almost done. When you poke them with the point of a knife, there should still be a little resistance. Drain and set aside.

Heat the oil in a wok or skillet over high heat. Add the garlic and saute until lightly browned. Add the onion and saute until it has softened slightly. Stir in the chili flakes and red chili paste, if using. Add the potato wedges and toss well. Add the soy sauce, sugar and peppercorns, and toss again.

Blend the cornstarch with the vegetable stock and gently mix into the potatoes. Cook until the sauce has thickened. Adjust the salt to taste.