Skip to Content
Home Writings Once Upon A Story... The New Persian Kitchen

I have always enjoyed Louisa Shafia‘s work. One of my all time favorite cookbooks, in fact, is Lucid Food. I was so thrilled to hear that Louisa had a new book out and this time, on a cuisine I really enjoy: Persian!  Her new book, The New Persian Kitchen, is not just a gorgeous book but a practical one. I loved that recipes are seasoned with traditional ingredients like saffron, pomegranate, tamarind and that she provides guidance through the book on how to best use each ingredient. Her work is full of passion and spirit and it really shows in her new book. 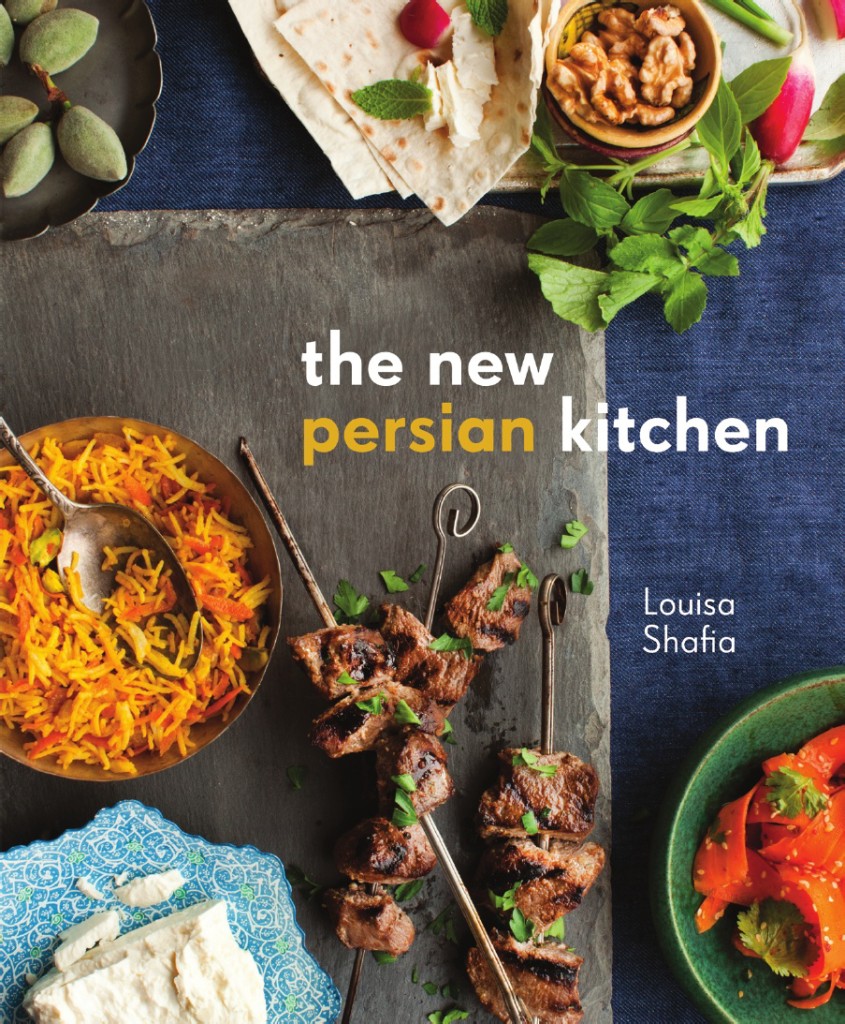 I requested Louisa to tell us about her book in her own words and to share some secrets of using Sumac. Without further delay, here she is:

Hello, dear Life of Spice readers! It’s an honor to be here writing on Monica’s blog, as I’ve admired her writing and her cooking for years. I feel that we come from a similar perspective, in that we try to approach the ancient food of our respective heritages— hers is Indian and mine Iranian—from a fresh, contemporary vantage point.

While Indian food is well known in the West, Persian food remains a mystery to most people here, but that may soon be changing. With the reality TV show “Shahs of Sunset” gaining popularity, and the Iran-based action flick “Argo” having won Best Picture at the Academy Awards, a lot more people are learning that Persian food comes from Iran, and in turn they’re becoming more aware of the wonderful flavors and unique ingredients of this still undiscovered food.

If you have already had the pleasure of tasting Persian food, then you may know that it actually has a lot in common with Indian food, but, owing to its position on the legendary Silk Road, it also shares significant traits with Chinese, Russian, Eastern European, and Arabic food, as well.

As I explain in the introduction to my new book, The New Persian Kitchen, “the best way I can think of to describe Persian food is that it’s like a lush garden in the desert, a familiar image from classical Persian lore. Like a blooming garden, Persian cuisine is perfumed with the floral scents of citrus, rose water, and quince. Indeed, fresh and dried fruits help to flavor meat, rice, and desserts alike, while ingredients such as pomegranates, saffron, and pistachios are called on as much for their taste as for their striking appearance, which evokes the colors of nature. Why a desert garden? Through a system of underground aquifers, ancient Persians transformed vast stretches of arid land into fertile oases, and over thousands of years, the miracle of water in such unlikely places led to a cuisine that relishes the gifts of the garden in every bite.

The New Persian Kitchen takes this reverence for fresh food as its starting point, and it draws equally from traditional Persian ingredients and modern, health-conscious cooking techniques to create a new kind of Persian cuisine for today’s cooks.”

Monica has picked out one of my favorite go-to recipes from the book: Turmeric Chicken with Sumac and Lime. The recipe features sumac, a tart and salty seasoning that’s used often in Iran. Purplish-red sumac is a coarse powder made from the red berries of the sumac shrub, and it has a taste that’s similar to lemon juice. You may have tasted sumac before in za’atar, the Arabic spice mixture that combines sumac with thyme and sesame seeds. In Persian cooking, sumac is used to season the saffron rice that accompanies kebabs, but its bold acidity complements fish, chicken, and vegetables equally well.

Here are some ideas for how to use sumac in your cooking:

Make sumac-ade: A tasty, pink drink can be made by submerging sumac berries in water and rubbing and crushing them to extract their flavor. Strained sumac-ade is high in vitamin C and can be sweetened and enjoyed just like lemonade.

Sumac yogurt: For a zesty and eye-catching condiment, whisk yogurt with minced garlic, olive oil, lemon juice, and salt and pepper. Serve topped with a generous amount of sumac.

Eat the ripe berries whole: The edible staghorn variety of sumac grows wild in the United States and has a place in Native American cookery. On their own, fresh sumac berries make a tart, chewy trail snack. Look for wild sumac on roadsides and in open woods and clearings. In the late autumn, you’ll see the plants bursting with bright red cone-shaped clusters of seedless berries.

Make your own za’atar: This savory Arabic spice blend can be made by combining sumac with dried thyme, sea salt, and toasted sesame seeds, and grinding the mixture in a mortar and pestle. Use this aromatic seasoning on yogurt, hummus, or on flatbread dipped in olive oil.

Make onion salad: A classic Middle Eastern salad is made by tossing thinly sliced raw onions with salt. Let this combination sit for 5 minutes, then strain and add sumac, along with chopped parsley.

Spice up lentil soup: Cook lentil soup with a handful or two of rice, and just before it comes off the stove, season with dried mint and sumac. Serve with a dollop of yogurt.

Turmeric chicken with sumac and lime

“Simple and quick to prepare, this weeknight chicken recipe still boasts all the exotic flavor of more elaborate Persian dishes. I recommend using chicken thighs, which are moister, more flavorful, and cheaper than breasts, and their dark meat contains minerals that you won’t find in white meat. Drumsticks and breasts will work just fine here, too, although breasts may require a little more time on the stove because of their density. If you use skinless chicken, increase the amount of cooking oil by a tablespoon or two. Serve the chicken with a fluffy grain, such as rice, millet, or quinoa.” 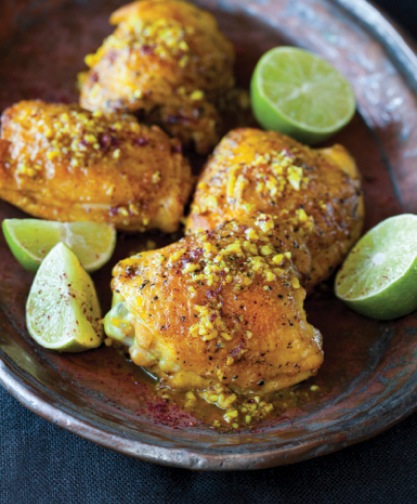 In a small bowl, mix the turmeric with 1 tablespoon salt and 2 teaspoons pepper.

Place the chicken on a rimmed baking sheet and sprinkle with the spice mixture, turning to coat both sides.

Heat a large skillet over medium-high heat and add the oil. Brown the chicken well on both sides, about 7 minutes per side.

Pour in the water, then add the garlic, stirring it into the water. Bring the water to a boil, then turn down the heat to low and cover. Braise the chicken for 25 minutes, until the inside is opaque. Transfer the chicken to a serving platter, turn up the heat to high, and reduce the cooking liquid for a few minutes, stirring occasionally until it’s slightly thickened. Season to taste with salt and pepper, and pour the sauce over the chicken.

Dust the chicken with sumac and pepper, garnish with lime halves, and serve.

Use whole portobello mushrooms in place of the chicken, or use 1 pound firm tofu, well drained and cut into slabs 1 inch thick. Youu will need a little extra oil for searing than what is called for in the recipe.