Skip to Content
Home Writings My Writings The King and I

Have you ever thought, “Wouldn’t it be so cool if, say, Bill Clinton [or insert the name of your greatest hero] came to dinner?” I thought so … until it actually happened. Frankly, it would have been a lot less anxiety provoking if Clinton, lover of Indian food, leader of the most powerful nation in the world, had come to dinner instead of my guest. Why? Clinton isn’t a super famous chef.

It started innocently enough: I was at a wine tasting at the Spanish Embassy when he first approached me. His striking food adorned several large cherry wood tables in the heart of the classically decorated Embassy dining room. 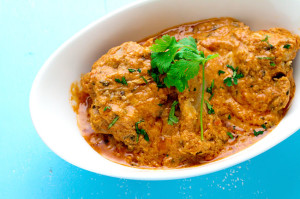 “I read your article on butter chicken,” he said, and smiled. “So when are you making it for me?”

His question caught me off guard. But not one to be outdone, I blithely answered, “Anytime!” thinking he would never, ever actually make good on the “invitation.”

Let me introduce you to the most accomplished person I know: Chef José Andrés owns and operates nine high-end restaurants in the Washington, DC area and around the nation. And these are no ordinary, run-of-the-mill eateries. Chef José’s miniBar, for example, has been called “the Cirque de Soleil of food.” Why? One of the dishes there is a drop of pure olive oil encased in sugar in such a way that it looks like a balloon. They use liquid nitrogen to produce magical food that tastes divine. He is the understudy of one of the most innovative chefs in the world, elBulli’s Ferran Adrià. Today, Chef José’s tapas creations include nectarines paired with anchovies; almond, garlic, and grape gazpacho; rustic bread with dark chocolate; and watermelon-tomato skewers. He has written books. He has his own TV show on PBS in the United States and one in Spain. He is so famous that he cannot walk down the street without fans mobbing him.

And now he was coming to dinner to my house.

Oh, and let me introduce you to me: an engineer-turned-food-writer with zero culinary training (unless you count lots of cooking for family and friends). Yes, I have written cookbooks, but I have no formal training in the field. None at all. I met Chef José several years ago when I wrote a profile of him for a magazine. I instantly fell in love with his infectious energy and his philosophy of food: Cooking is not hard, he told me, as long as you cook with good ingredients, love, and abandon.

“Honor your traditional tastes but don’t be afraid to experiment,” he would often say, and that philosophy changed my life.

So here I was, with a date on the calendar when Chef José and his wife and three lovely young daughters would be coming to dinner to taste a dish I grew up on: butter chicken. It’s a delightful dish of chicken marinated in yogurt and spices, baked in the oven and then simmered in a silky tomato-butter sauce. I knew how to make it, I’ve made it a million times. I learned to make it from my father, and now I wished I had never even heard of it. How does one cook for the best chef in the world? And get away with it?

As I fussed about the groceries and let anxiety get the better of any good sense, my husband offered this solution: “Don’t worry, as soon as they show up, have two shots of vodka. You will do great.” Not funny.

I had purchased the chicken three times already and thrown it out. It just didn’t look or smell or feel right. And now I was staring at the tomatoes I had just bought. Would Chef José be able to taste that they were generic tomatoes from the grocery store down the street and know that I did not have time to make it to the farmers’ market? I felt that I had already failed him on the first count of using good ingredients.

I put the tomatoes in the refrigerator and hurried out to the organic grocery store to buy organic tomatoes and other ingredients. The dinner was the next night and I was one step away from a complete breakdown. What would I serve with the chicken? Rice? Plain? Steamed? With peas? Without peas? With cumin? Oh, Lord.

It occurred to me then that he was bringing kids, his kids. I had forgotten to ask if they ate Indian food. So I called his assistant.

“They are José’s kids. They eat everything,” he said.

I should have felt relief. Instead, I felt more pressure. His kids had probably grown up on the best food in the world and now I was going to punish them with my cooking.

As I browsed the store aisles, I contemplated the menu: Should I cook all my signature (read: boring) dishes or should I innovate? Should I cook dishes from my book or should I create something dazzling with, say, beets? I decided to leave the dazzling to the chef and to create a meal around my own family’s favorite dishes: We would start with lentil dumplings bathed in yogurt sauce and drizzled with a tamarind chutney for appetizers. For the main course I’d make butter chicken, rice with peas, honey-and-ginger shrimp, Indian cheese cooked with onion seeds and bell peppers, potatoes tossed with five aromatic spices, and green beans cooked with coconut and peanuts. Hmmm. It did not seem enough.

And then I decided to innovate: I added a three-layer appetizer of bread brushed with olive oil and topped with a hazelnut mixture. One taste and hubby said it would pass. I tried another of cheese topped with red pepper jelly. All three of my tasters (hubby and two kids) tossed it into the wastebasket.

I was short one appetizer, so I decided to make an Indian-style tapa as a way of tipping my hat to Chef José’s heritage. I filled a small, hollow, puffed crisp bread with spiced shrimp. I would serve it over a shot glass filled with a lavender-hued coconut drink. But it was already Saturday night and there was no way I could find kokum, the Indian fruit I needed to make the drink. I began to panic. Now, a normal individual would have just changed the soup, but I was determined. I called all my friends, but no one had any kokum. Then I remembered a woman who had written to me saying she liked my work, and that she was from the part of India where kokum is commonly used in their cooking. She also turned out to live close to me. I called her and yes, she had some and even offered to share it with me. If this sounds unreal, think about it: Chef José was coming to dinner. That was the only reality. 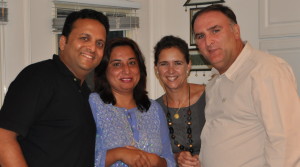 As the wine settled my nerves, the smell of roasting cumin began to calm my spirit. I felt my dad’s presence in my kitchen, guiding me as I prepared the marinade for the butter chicken. “Whip the yogurt and mix it well with the spices,” he would say. I could hear my mom adding, “Make slits in the chicken or the marinade won’t be absorbed correctly.” As my parents played coach in my mind, I began to cook like I always do, with a smile. Perhaps the person who was coming to dinner wasn’t only a great chef: he was also a friend, someone who had read my work, who had felt a connection to me and was coming to explore that connection. It calmed me down.

By now it was past midnight. I had everything under control.

And then it occurred to me: I had forgotten to clean the house.

Out came the vacuum, in went the dishes into the dishwasher, I opened another bottle and away we went, under the sofa, over the stairs, inside the bathroom, outside on the stairs. It was 3:00 am and I noticed that there were a few stains on the wall. Off I went to the all-night store to get Mr. Clean to help.

The day of the dinner, I prepared the salads, laid out the plates, called hubby a hundred times to remind him to get the drinks. He came home with no wine. No wine!? I remember Chef José once telling me, “Comer sin vino, es comer mezquino” (a meal without wine is a stingy meal). “We will serve him Scotch, as is done in many Indian homes,” was my hubby’s logic. I was too panicked to care.

They arrived with smiles and gorgeous kids and I wished the ground would open up and just absorb me. Hubby served them drinks, which they accepted, smiling, as I watched a small stain on the carpet seemingly come to life.

And then José got up and began walking. TOWARD MY KITCHEN. “Smells good,” he said, and began to open pots and pans and sniff and pick things up. I just about died. I had no idea how to react. His wife noticed and smiled, “José, you are making her nervous, stop doing that.” 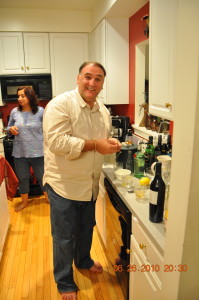 He laughed and sat down with me. “What are we eating, señora?” I served them the dumplings. “Delightful,” he said and then quizzed me on how they are made.

“Do you know what would go perfect with this? I will make us all a cocktail,” said my favorite chef. And with that he reached over to grab a knife that was hanging on, barely, to a magnetic hook on the wall. The entire contraption broke and fell off the wall. José turned and looked at me, apologetic. I couldn’t take it anymore. I burst out laughing. Nothing else could go wrong now. It was my party and I was going to enjoy it. 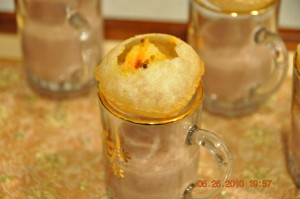 I told them about the Indian tradition of eating with your hands, and so my guests obliged and ate with their hands. And went a step further – Jose told all eight kids to do the same. They did and they asked for seconds. 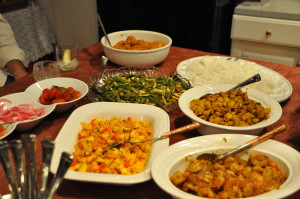 As he ate he was on his BlackBerry. I knew instinctively what he was doing. He must be Tweeting about this, I thought. 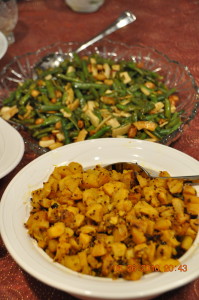 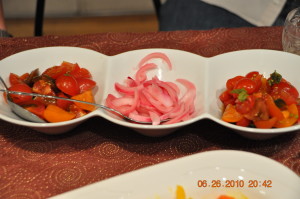 I served rice pudding laced with cardamom and garnished with rose petals as a tribute to José. The first dish of his that I fell in love with was quail with rose petals.

He ate and then said, “I love this and I do love your butter chicken. I think I will do something with similar flavors at miniBar.”

As soon as they left, I charged for my computer. José’s Tweet : “If I die today, I dont care because I have been to an Indian paradise with the cooking of Monica Bhide.”

And the next morning, I had an e-mail from Scott Drewno, current DC superstar executive chef at Wolfgang Puck’s Source: “When are you going to make butter chicken for me?”

Round two. I am ready when you are.

The photos are all mine except the one for the lovely butter chicken! That is by the very talented Sala Kannan. And here is the recipe.