Skip to Content
Home Writings My Writings Spice it up!!

Indian by birth, I was raised in the Middle Eastern island nation of Bahrain, nurtured by my mother’s mostly traditional Indian cooking. When I moved to the U.S. nearly two decades ago, I instantly fell in love with the land’s playfulness with food.

My fun-loving American friends — many themselves immigrants from around the world — created new tastes by adding their own spices, herbs and traditions to typical American dishes. I felt a delightful sense of excitement and wonderment toward food and quickly became enamored of my friends’ philosophy of no arbitrary rules on how to cook. It was all about what tasted good.

The influence of those friends has greatly affected the way I cook. American food is an important part of my home cooking repertoire, but I always add a spicy twist: Cobb salad is drizzled with a lemon-cilantro dressing; meatloaf is scented with cloves and cinnamon; Hoppin’ John is cooked with basmati rice.

My lemonade has a touch of saffron. Mac and cheese at our house is never prepared without a foundation of ground lamb. I combine peanut butter with spices as a marinade for chicken. Starbucks ice cream makes great Indian-style cold coffee. Brussels sprouts hold hands with curry leaves and spices in quick stir-fries; cookies always have anise or fennel; cardamom is in every cup of tea; deli-roasted chicken is served on cumin-scented basmati rice. And I never serve vanilla ice cream without freshly sliced Indian Alphonso mangoes.

My tendency to spice up every food in sight began to bump up against my American-born son Jai’s American tastes and sensibilities. I skimped on the truth about the eating habits of his on-screen buddies — Barney loved fenugreek in his spinach; Tweety Bird adored Indian cheese; Scooby Doo always finished his turmeric-spiced yellow rice; and the Wiggles would not ever pass up pancakes made (like mine) with beets in the batter. Jai did fine until the strawberry milk incident.

When Jai was younger, I used to make my favorite drink for him: a cold glass of milk mixed with Rooh Afza, a rose-pink syrup made with fruit and vegetable extracts. I hated drinking plain milk as a kid and would (secretly) pour it down behind my mother’s couch. (It took my parents a week to figure out where the awful smell was coming from, and earned me a month of punishment. But I digress.) So the only way I knew to drink milk was to mix it with this syrup, which turns the milk a sublime pink.

Ummm … perhaps it was the strawberry flavor? 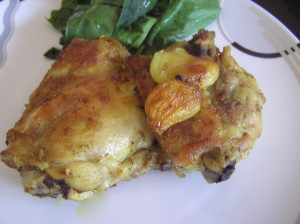 This recipe is so so so easy that you will wonder if it is good. Yes, it is good. Remember my motto? A recipe does not have to be complicated to be good.

4 boneless or with bone, skinless chicken  (6 to 8 ounces each)

1 ½ teaspoons curry powder of your choice – I like to use one with a punch. You can use what you like