I can’t swim, I can’t ride a bike and I can’t play any sport to save my life. I’m not afraid of the water, or of falling, or of engaging in physical sports. I’m just a product of my upbringing. I grew up in the Middle East, a conservative mecca, and I did not get a chance to play sports. That, and I was horribly uncoordinated. I took dance lessons for years to develop poise and grace, but I could not handle a racket or heaven-forbid, a ball.

So when my son, at six, showed interest in soccer, I was thrilled. I thought it would help him learn how to be a team player, as well as help him master physical skills like foot-eye coordination, but I never thought watching his games would teach me how to handle my life. I always thought that I would be the teacher; my kids, the students. Boy, was I wrong! In fact, I’ve discovered that kids are often the best teachers. 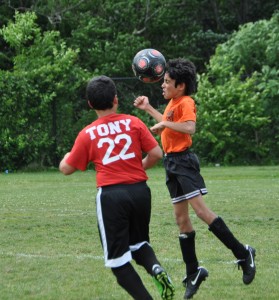 At first, Jai, who gets his speed and agility from his athletic father, was petrified of being on the soccer field. He was a tiny, skinny kid who was very easily distracted (oh, was that a butterfly flitting by on the soccer field?) and would generally run away from the ball instead of towards it. As I watched him, I was reminded of my own plight. Having just quit a job to pursue a new career, I was like him, just standing there hoping something would happen. I was unsure of what to do and afraid of the other players in the field. Afraid they would not accept me, that perhaps I wasn’t really meant to be there. I wanted this new career but found myself running away from the ball, so as to speak.

A few months went by and I watched Jai listen to his coach intently at every game but still shy away from the more skilled and frankly, physically larger, players. And then it happened, out of nowhere. He discovered that he could run, and I mean run. The sidelines cheered him on as the “roadrunner.” He laughed and told me,” Mom, I am not afraid of them anymore, I can out-run them all.” At the same time, I won a scholarship for my writing, my new career. They told me I was the best new voice of the year. Just as he discovered his secret weapon, speed, I discovered mine – my voice. I may have, like him, lacked professional training or have the skills of my peers, but he and I both discovered our own unique talents.

His speed gave him confidence to grow and learn new skills. My voice gave me strength to write for publications I initially thought were out of my league.

He got selected for an All-Star game featuring the star players of all local county leagues. The kids worked hard for the game and lost hard. It was a crushing defeat. At the end of the game, the kids, all began to cry and ran to the coach for a hug.  I had been facing my demons of no financial security as an entrepreneur. A pill that was difficult to swallow after having been in a job that paid six-figures. I learned that day, as I watched the kids cry and then later laugh and run around with the ball again, that nothing is permanent. Failure and success are all moments in time and that what is critical is being present during the journey.

As he got older, speed was good not enough. He began to focus on getting his footwork in order, relying on members of his team to show him how to play better, smarter. A couple of years ago, the boys would say hello to each other and maybe goof-off a bit during practice but they weren’t really a team. Now, I could see the difference: a comrade once fell on the field during a game, and the entire team rushed to his side, sat down on one knee until the child was carried off the field and clapped and clapped for him until their hands were sore. (The child, by the way, was fine.). I could see them stop and help each other with their shoe laces, or show each other the best way for a corner kick or yes, how to bend it like Beckham.  “Jai, I loved how you ran across the field yesterday and did not let those guys near the ball,” said one of his team-mates. And Jai in return would show them how to gain speed when they ran. He was still a scrawny kid but now he was also intent on succeeding. I began to apply this observation to my field. I began to contact other writers and reached out to other women in the area who were changing their fields. I formed my own mentor group. We looked to each other for advice, for help, for growth but mostly for camaraderie, specially on hard days. 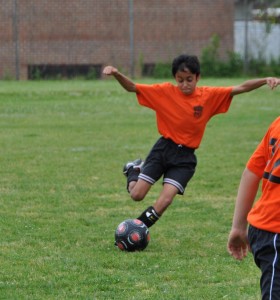 Jai won tournaments with his team and I got placements and awards.

And then it got hard.

The boys were growing in both size and skill. Jai, now 10, has yet to have his growth spurt. I was finding it hard to keep going in a economy that has been tough on the publishing industry.

But I watched him, closely. Eager to see how my young child would handle these setbacks, so I could follow his lead. He began to work in earnest on his foot skills, began to focus on strategizing more with his coach (who is amazing) and his team members. They would discuss plays, discuss how to out-do the other team, never miss a practice, and always be focused and present during the games.

I felt pretty ashamed of myself as I had decided that perhaps I should just give up. But watching him and his persistence made me try harder. I began to work harder on my ideas, on sending out pitches, on meeting with editors. I began to strategize with my mentoring group and learned how not to take no for an answer.

We are in this together, my child and I. After a winning season, his team lost a big tournament last night.  I tell him the next morning that I am writing a story about him and his soccer team. “We are the best, Mama, because we love to play.”

Out of the mouth of babes: A love of the game or in my case, of writing, makes it all work out in the end: good, bad and otherwise.

(PS – I wrote this at the end of last season)