Skip to Content
Home Writings Giveaways Sanjeev Kapoor's How to Cook Indian – come and get it!

Chef Sanjeev Kapoor has been called “the Rachael Ray of India,” but by Ray’s own admission, he has a bigger audience, has published more books (more than three dozen at last count), been on TV longer, starred in more shows and sold more products. For the past, seventeen years his TV show “Khana Khazana” (“Food Treasure”) has become the longest-running show of any kind in Asia, according to Kapoor, reaching more than 120 countries and more than 500 million viewers. His books have sold an estimated 10 million copies. His Web site, Sanjeevkapoor.com, gets about 25 million hits a month. He owns more than a dozen restaurants. All this and he is an amazing human being! 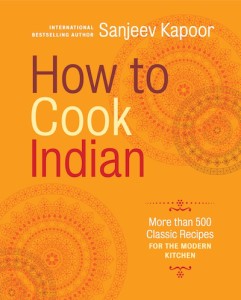 (STC, 2011). It has close to 500 authentic recipes that reflect his style, his experience and his tastes. (I am happy to say that I played a role in helping the book come together.)

Here is one of my favorite recipes from the book.

Sanjeev’s publisher STC is giving away 5 copies for lucky Life of Spice readers.

To win: leave a comment here about why you want to win this book and then tell your friends about this giveway – by email or Twitter or FB or in person (!!) or however you want!!
I will pick five winners on March 30th at 4 p.m. est. This giveaway is valid only for US and Canada.

Come on.. let’s get your comments in!

(gorgeous photos of the dish taken by the lovely Soma Rathore)

Adapted from “How to Cook Indian 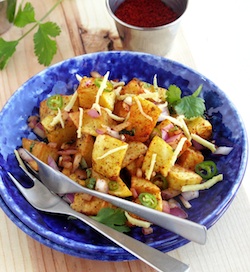 This recipe will transport you to the capital of India. Delhi, known as “Dilli” in the local dialect, has two sections: Old Delhi and New Delhi. Old Delhi is still the stronghold of eateries that boast the old style of Mughal cooking. New Delhi is replete with contemporary restaurants and street food. This snack, sold on the roadside, is best eaten just after the potatoes are cooked while they’re still crisp.

1/8 teaspoon black salt (most Indian grocers carry it, if you don’t have, leave it out)

Want to meet him in person? He will be at Indique Heights, DC on April 1st and then in NYC (Tulsi – April 5th) and the Varli Festival in NYC on April 7th.