Skip to Content
Home Writings Once Upon A Story... Junk food WITHOUT the junk!

I am so thrilled that Casey Barber, a very talented writer and cookbook author, is joining us here today. Her brand new book: Classic Snacks Made from Scratch: 70 Homemade Versions of Your Favorite Brand-Name Treats

has just been released and is already well on it’s way to becoming a cult classic. So exactly what makes this book special? Childhood snacks – Twinkies, Goldfish, Nachos, Cheetos, and more — all prepared at home without the use of any junky preservatives. The recipes themselves are easy to follow (she indicates difficulty levels with each) and what I really liked about the book are her witty headnotes. A job well-done! 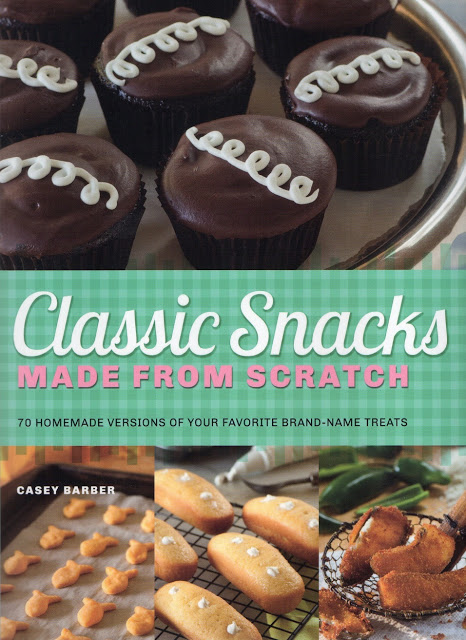 I attended Casey’s book launch party when I was in NYC a few weeks ago and she had prepared so many dishes from her lovely book. I could NOT believe the Oreos I was eating weren’t from a bag and ditto for the potato chips. But what really got me were the Twinkies. So I am a store-bought Twinkie virgin. I have never tasted those. Casey had some home-made ones at her party. I kept eating them like they were going out of style: they were light and fluffy and delicious. I asked random strangers at the party if these compared to the “real Twinkie” and the response: these are better!

So there you have it. Want to make your favorite classic snacks at home without the JUNK?? Then buy this book NOW 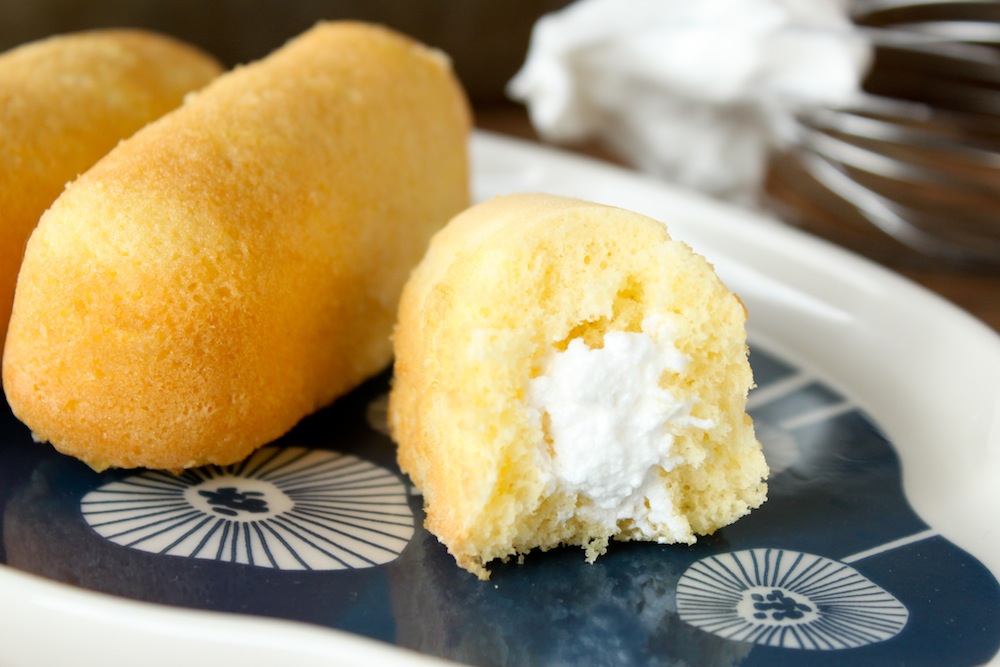 My kitchen has become a Twinkie assembly line. The sticky sponge cakes cover every cooling rack, I swear I can tell from smell alone when the batches in the oven have reached the perfect moment of golden doneness, and I can whip up a bowl of marshmallow filling in my sleep. By my count, I’ve made at least 100 Twinkies in the past two months, and I’ll be making 100 more in March alone. 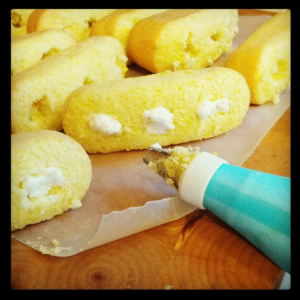 Back in 2010, when I was struck with the initial idea for a cookbook about homemade versions of junk food, Hostess was still a robust company from our outsiders’ perspective. Twinkies would be around, never decomposing, perfectly intact in their clear plastic sheaths until the end of time. By late 2012, as I turned in the final edits for Classic Snacks Made from Scratch

, the bad news had hit the presses and mass panic over the fate of Twinkies, Devil Dogs, and Wonder Bread had reached a zenith.

From a marketing perspective, this twist of fate was heaven-sent, leaving me with the perfect news peg for my book. From a taste perspective, it was more than unfortunate, considering Twinkies were one of the few packaged treats that rarely passed my lips as a kid.

Yes, Twinkies were more or less persona non grata in my personal snack stash growing up.  Though I unabashedly snacked on creepy neon marshmallow-coated Sno-Balls and cravenly crunched on Chicken in a Biskit crackers with their faux poultry-flavored coating, Twinkies were too cloyingly, chemically sweet, and just too plain old sugary for my liking. They coated the inside of my mouth with their disturbingly thick sponge-cakey residue, leaving me with the intense urge to wash them down with a handful of pretzels, anything salty to purge their processed aftertaste.

I knew, of course, that I’d have to include homemade Twinkies in the book, but I could never have foreseen that they’d be the greatest hit, number one on the list of most-requested recipes from readers near and far. Twinkies have become my culinary equivalent of “Hotel California” or “Ants Marching,” a song forced onto the set list by the fans no matter how many times the band has played it or how sick and tired they are of doing so. 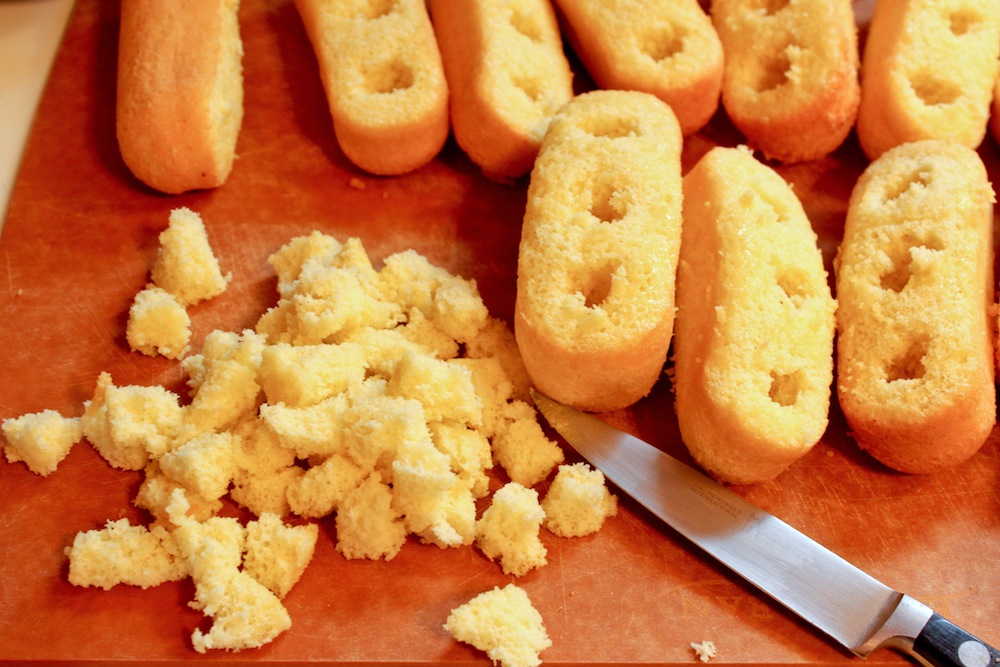 So here I am in my kitchen at 10 at night, making my umpteenth batch of sponge cakes for this weekend’s book signings, coming to terms with my legacy as the Twinkie maker. I shouldn’t hold such a grudge against the Twinkie for taking over my life this way: making them is more time-consuming than technically difficult , though you do burn through a whole lotta eggs between the cakes and the filling. And homemade Twinkies, though still firmly on the vanilla-sweet end of the flavor spectrum, have (IMHO, of course) a far superior taste and texture to the packaged, processed originals. No mouth residue on these babies!

After all, what I’m making here isn’t just a Twinkie. It’s a physical representation of memory, a fast-track flashback to childhood, a time machine, to quote Mad Men’s debonair Don Draper . That’s why I wanted to include so many diverse recipes in Classic Snacks Made from Scratch: my knee-jerk love for Corn Nuts is how someone else feels about Twinkies, and how someone else feels about apricot Fruit Roll-Ups. I don’t want to deny anyone the chance to feel that rush of pleasure when reconnecting with those long-lost tastes. That sense of remembrance and wonder is the most important part of the book, more than a simple recipe for a chocolate cupcake or marshmallow candy could be on its own.

And that’s why I’ll keep making Twinkies, no matter how tired I get. Because they’re more than flour, sugar, eggs, and vanilla; they’re a bite-size reminder of what it means to be a kid.

Casey Barber is the editor of Good. Food. Stories. and the author of Classic Snacks Made from Scratch: 70 Homemade Versions of Your Favorite Brand-Name Treats

, as well as a freelance food writer and recipe developer whose work has appeared in Gourmet Live, Better Homes & Gardens, Leite’s Culinaria, iVillage, ReadyMade, and other publications. She contributes regularly to Serious Eats as Slice’s New Jersey correspondent.