Skip to Content
Home Writings Giveaways Giveaway: How the CookShelf App came to be 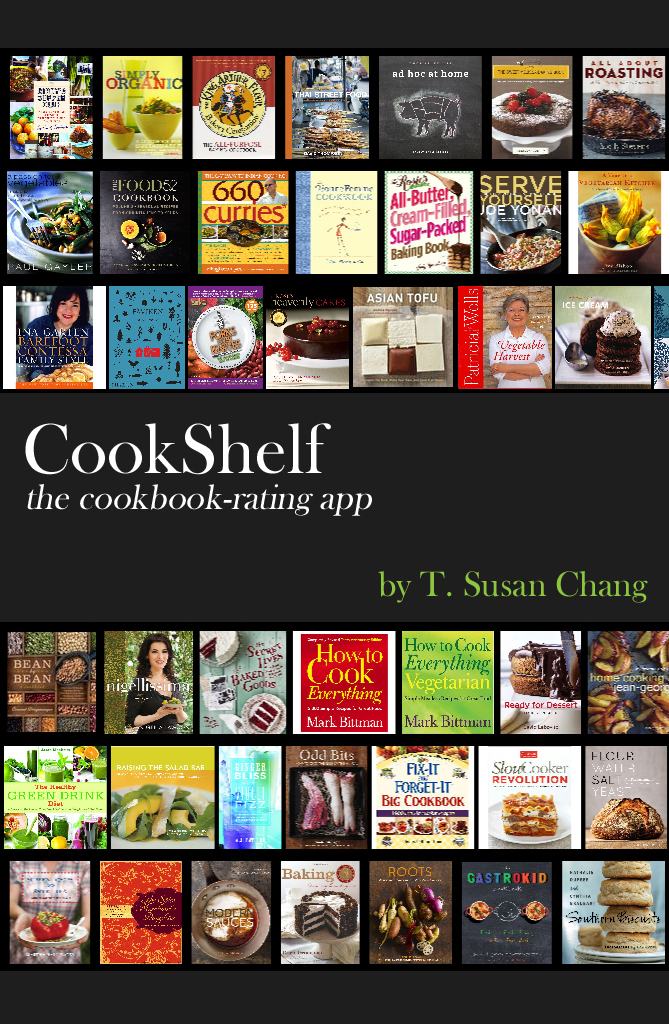 I want to tell you about the coolest new app in town, and of course, it has to do with cookbooks! T. Susan Chang, who is the cookbook reviewer for NPR and The Boston Globe, has come out with a terrific app that rates cookbooks. It is called COOKSHELF. There is NOTHING like this out there. It rates the books based on a scale that is actually easy to understand and use and tells us which recipes made her list and which should not even be attempted! What l love about this app is that Susan has added books which she has personally reviewed ( this is not a crowd-sourced app) and there is so much integrity in the reviews. Also, if you are tempted, as I always am to buy the book, Susan includes links within the app for easy click and buy.

GIVEAWAY: A great gift idea? Yes! And we are gifting ten of our readers with a free app. What do you need to do to win? Tell us what your favorite cookbook is and why and we will pick ten winners by Friday, Dec 6th  2013.

In the meantime, I asked Susan Chang to write me a little story on how the app came to be.. a little behind the scenes view. I am honored to be included in the story.. and very, very fortunate to be a tiny part of such a terrific app.

“You know, that would be a great idea for an app,” said Monica thoughtfully, over a steaming bowl of rice.  We were sitting in the cramped corner of a midtown Japanese noodle shop, sharing stories, commiserating, slurping soup (mostly me)…and brainstorming (mostly Monica).

I’ve been a cookbook reviewer for a long time, but my reach is limited.  So I’d been moaning about wanting to finding better ways to share what I knew about cookbooks and help make the enormously difficult task of choosing a cookbook easier. Could I develop a rating system? Could I put it on my website?  How? And who would it help?  As usual when I have a bright idea, I’d been running it around in circles in the attic of my mind.  After a while, my thoughts would collapse on themselves and the idea would fly out the attic window, never to be heard from again.

But with that one comment from a friend over rice and soup, amid the hectic chatter of a hundred other patron, something crystallized. Of course! I thought. And as it happened, we were at a cookbook conference –  and as it happened, the developer who had published Monica’s own terrific app, iSpice, was there.  I went home with her card, and within no more than 2 weeks, the app was contracted and underway.

Now, unlike Monica, a former engineer, I’m not the world’s most technical person. I still write in fountain pen. I don’t own a smartphone. I’ve never even played Angry Birds.  But I’m willing to learn and make mistakes and look dang foolish, just like when I clawed and scratched my way through the HTML and CSS coding on my website.  And I had Monica, who never backs down from trying something new and hard, for inspiration.

So that’s how it happened…6 hard weeks of developing a rating system, writing reviews day and night on a new CMS template, sorting through hundreds and hundreds of tantalizing cookbooks (including, needless to say, Modern Spice), long nights of husby taking over the childcare so I could finish rating, teaching my 12-year-old to do data entry, hitting up friends for advice and ideas and even the app’s title – dreamed up by my friend Cindy on an hour-long car ride.

So here it is, my gift to the cookbook lovers of the world. Brought to you by Sutro Media, hundreds of woman-hours, scores of brainstorming sessions, and one friend with a good idea.  Read and enjoy!

About T. Susan Chang T. Susan Chang’s cookbook reviews can be found in the Boston Globe food section and at NPR. For over 10 years, her recipe-tested, fair-minded critiques have helped readers discover the best new recipes for themselves and the cooks they love.