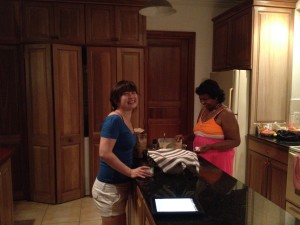 .
That evening Cynthia showed up at our rented house with a shopping bag filled with crushed chickpeas, toasted cumin, flour, baking powder and turmeric.  She puts my new tawa on the stove and started to pour half a bag of flour into a large mixing bowl.  Over the next half hour, she showed me how to ground and toast the chickpeas with the toasted cumin, and how to mix and knead the dough until a moist shiny mass formed on the counter.
“Now we wait.“ she covered the ball of dough with a kitchen towel and we walked out to the veranda with tall bottles of beer. In the cool evening air with crickets chirping and the scent of lime leaves in the air, she told me how she fell into her roti business. Born to East Indian parent in Trinadad, Cynthia Baynes, grew up making roti. “They were part of my household, “ she told me with a mischievous glint. “I started making rotis and parathas when I was seven years old.”   She came to live in Tobago when she met her husband, a local policeman.  When her husband passed away many years ago, she took to making roti and curry as a way to pay her bills. “There were lots of constructions going on and I thought they must need to have lunch some time.”
. 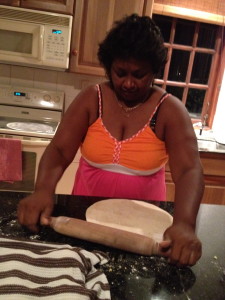 We returned to the kitchen an hour later, and I watch Cynthia deftly pinched the dough into 12 equal sized balls, rolling them between her palms. She picks up one ball and using her fingers, she forms a small bowl like shape with the dough. “You have to use your thumb.” She said, showing me the dough, which looks like a giant orecchiette in her cupped palm. She spooned toasted ground chickpeas into them. “You have to make sure your chickpeas are dry, otherwise you won’t have the right texture.” She pinches the edge of dough around the chickpeas and fully enclosed the dough around them, placing them back on the table. 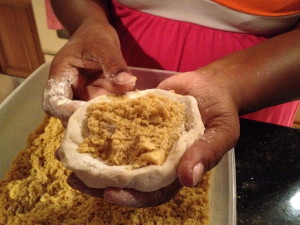 .
Once all twelve balls were filled, she turned the stove on and while the tawa is heating, she flattens one of the balls with the heel of her hands and rolled the disk into a large flat round shape, using the minimal dusting of flour. I tried rolling one out and my not only got stuck on the countertop, it also looked more like a giant octopus than a neat circle. I secretly regret all the pastry shortcuts I’ve been taking for the last 20 years. “It takes practice,” Cynthia laughed, looking at my effort. “You just need to move the dough around more so they won’t stick.” She grilled the dough one by one on the tawa, turning them this way and that, brushing them with oil, and folding them into quarters. These rotis did not puff up like balloons, but the kitchen was filled with the beautiful scent of the bread. By the end of the evening, we had a stack of rotis in our possession. Brad strolled in, picked up a roti and a bowl of spiced string beans in the fridge and went out to sit by the pool. 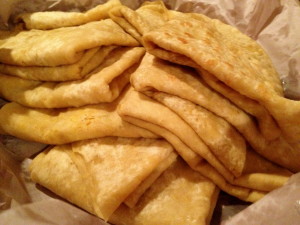 .
“I am never going to be able to finish these,” I looked at the tilting stack of folded breads, sitting on the kitchen island.
.
“Well, you give some to your housekeeper, “ Cynthia replied as she cleaned up the kitchen. “The rest, you wrap them up individually, and freeze them. When you want to eat them, you cover them with a damp paper towel and microwave them for a minute, and they will be as fresh as the day I’ve made them.” I stared at her in disbelief. Microwaving bread is just wrong.  She laughed at loud, “Where do you think the one you had yesterday came from?”
The next day, I was sitting on the beach in Mount Irving Bay, watching Brad attempting to ,turn on a wave, a little yellow dog trotted up to me wagging his tail. As I scratched his ears, George said, “Oh you found Roti, our residential beach dog.” I asked George who named him that. “We all did,” George said slowly in his Caribbean twang. “ We named him Roti after he protected two girls from a really bad guy because they fed him leftovers from Cynthia’s roti stand everyday. The girls still send money every month so he gets fed and goes to the vet.” George smiled pleasantly. “I guess he knew a good meal when he sees it.” I guess he does.