Here is what I want you to do: Stop everything else you are doing. Go and get yourself a coffee, tea, glass of wine.. anything that will make you sit down and stay put for a moment.

Okay, I am waiting.

It is a gorgeous blog. The pictures will make you drool. The recipes will make you realize the amazing diversity of Indian food and the author will make you smile with her delicious memories.
I adored Radhika’s blog so much that I had to contain myself from begging her to do pics for me. Then, she actually asked if she could do a post. Talk about luck!
Without further delay, here is the wonderful Radhika with a lovely and comforting dessert recipe.. her photos, her recipe, her words… I am just lucky to be able to feature it. 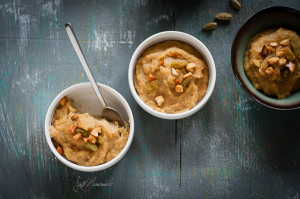 Photos courtesy of Radhika as well.

After I started blogging, I had a realization about food like I never had in my entire life.

I realized that we eat food not just for taste but, for several different reasons beyond nutrition and well-being. One of the reasons I think we like to eat familiar foods is because of the way we feel when we eat them, for the memory associated with the first experience of that food.

This dish Sajjige [pronounced suh-gee-gay, in kannada] is so simple. At the face of it, it is a mere semolina milk pudding, nothing in the making of it or technique is complicated nor is semolina a fancy ingredient. Yet my mind can cull out precious memories to tell me how special it is.

When I was growing up, this dish was made very often at home, often enough for me to develop a distaste for it, out of sheer familiarity and boredom. Surprisingly after so many years, I am curious to revisit dishes like this that I ate because I have to but not want to, that I had abandoned and sworn not to eat again, annoyed at how often they were made. I like to make them now to rekindle memories.

Like I said, we love food not just for the taste, but for the memories, the place, the people, the good times we shared or bad for that matter. To me, Sajjige is truly one of those foods which is always accompanied with a helping of fond memories.

Long back when I lived in my grandfather’s house in a big joint family, once, all the ladies of the house were out-of-town and we, the children were left under the care of my grand dad and uncles, who were no regular cooks. When it was meal time, they decided to try their hand at making Sajjige. I don’t know the reason but, may be I guess, they thought it was easy enough not to mess up. Well, no goof ups but, they made a huge potful of it, runny as a smoothie and sweeter than a candy. You can imagine. My brother, who was never the one to complain about food, took a huge bowl of it with glee. Yet, even in his insatiable hunger, he couldn’t get to finish it, however hard he tried. In our house, food was never to be wasted. Whatever was served on the plate had to be eaten, no matter how long it took. Period.

As he sat there, struggling to gulp an almost impossible-to-finish double serving, the rest of us came up with a rhyming song on Sajjige to mock his plight. Then on, every time Sajjige was made at home, it became an unsaid tradition to sing that song, irrespective of whether anyone was in a similar plight or not. Even today, whenever I make Sajjige, I just cannot take a bite without time travelling to that moment in the distant past, to that day when I rolled on the ground laughing my stomach out at my brother’s predicament!

It is a simple dessert. These memories make it special.

The only difference from how it is made traditionally at home is the use of brown sugar as I find it so very tasty without the extra sweetness. When made with regular sugar though, Sajjige comes out a nice saffron-creamy-yellow. I find the aroma of saffron to be almost hypnotizing good and wouldn’t substitute it with anything else. 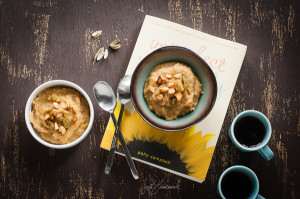 a pinch of good quality saffron

Pour water and milk into a medium-sized heavy bottom pot or saucepan and bring to a boil.

In the meanwhile, heat a medium-sized kadai or skillet on medium heat. When the pot is hot enough, add 1 tsp ghee followed by cashew pieces and fry till they are golden.Remove cashew pieces onto a plate. To the same kadai with residual ghee, add rava/sooji and roast until fragrant and light brown, remove on to a dry plate and let cool.

When milk is about to come to a boil, crush saffron with your fingertips, sprinkling over the milk. As the milk boils, saffron will leave out its lovely color. Be cautious not to let milk boil over. Stir to dissolve.

Take the pot off heat and scrape off all the rava from the kadai into the milk, stir swiftly to avoid lumps. Now reduce heat to low and place the pot back on the stove. As rava cooks, it will begin to bubble up like a min volcano. Cover with a tight-fitting lid and let cook on sim for about 5-6 mins for it to soak up the milk. When cooked, rava turns translucent and soft. Drizzle in 1-2 tbsp ghee (per your taste), spoon in brown sugar and stir to mix well. As soon as sugar dissolves, switch off and keep aside covered. Pudding loses its melt in the mouth texture and becomes very chewy if cooked with sugar any longer.

Wash the sultana raisins in a small bowl, strain and towel dry. I like to serve them warm in small round bowls with fried cashew pieces and sultana raisins sprinkled on top.

Substitute water with double the milk if using non-fat or low-fat milk and boil a little longer to reduce moisture content.

I prefer Spanish saffron for its quality, fragrance and color. Refrain from using too much saffron, a pinch goes a long way.

Substitute brown sugar with jaggery or regular cane sugar to suit your taste.

Pudding tends to become dry after a while. To reconstitute, place over low-medium heat, add some milk and stir until desired consistency is reached. Mix in sugar and serve immediately.