Skip to Content
Home Writings Once Upon A Story... Guest post: Kathleen Flinn talks about “The Tricky Business of Tasting the Past” 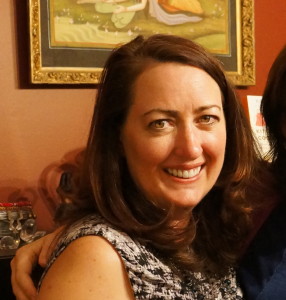 Every time I have a chance to talk to or interview Kathleen Flinn, I jump at the opportunity. She is inspiring, motivating and she as in innate understanding of the written word. In addition to her two bestselling memoirs (The Sharper Your Knife, the Less You Cry

AND The Kitchen Counter Cooking School

, she is now working on her third memoir. Did I mention she is talented?

If all that work wasn’t enough, she has taken on another mission: Kathleen is the creator of CookFearless.com, a site focused on inspiring confidence in home cooks with a focus on kitchen fundamentals and a curated library of highly reliable recipes. In January 2013, she launched “The Year of Cooking Fearlessly” initiative, a 12-month project to help teach home cooks everywhere the basics of cooking.

She was kind enough to pen a guest post for me…. I truly loved it and  hope that you will too!

The Tricky Business of Tasting the Past

Behold what I call “The Shroud of Turin Chicken Pot Pie,” a scan of a page unearthed from the bottom of my grandmother Inez Monk Henderson’s recipe file. Folded carefully, it marked  an obvious attempt to capture in the barest forms a recipe she didn’t want to forget, or perhaps, had planned to give to someone else to decipher. She had made notes on the folded exteriors for recipes as well, one too faded to detect, the other for dill pickles.

I’ve been going through my family’s recipes as part of research for my third book. It’s best described as a multi-generational memoir with recipes. I don’t even show up until Chapter 6. (I’ve not quite figured out how to tackle that part, actually.) My mother’s recipes are a bit neater, captured in two spiral notebooks. Originally, grandma stuffed hers in an old accordion envelope, but in the late 1950s, someone gave her a green box and she transferred them all there. Grandma didn’t collect many recipes for daily cooking. It’s notable that nowhere in her files does she have any recipes for soup or roasts, for instance. Why would she? You made soup with leftovers and she knew all her standards by heart.  Older, more yellowed pieces of newspaper involved cakes made with mayonnaise or cookies starring cheap ingredients. Later recipes leaned toward more ”elegant” or “modern” recipes for her time, such as Chicken Divan.

Mom and I think this page comes from the late 1940s. Notice the short-hand: “Two onion – cut up.” “One chicken – 3 1/2 pounds, boiled until tender.”Also, I point your attention to the absence of salt, pepper or other seasonings but the inclusion of “1 can mushrooms soup.” All of it in “chicken scratch,” how she referred to her own handwriting. She left formal education at age 13 in the early 1920s, when her father was killed in a lumber mill accident. She was forced to stay at home and help rear four  brothers and sisters. She married my grandfather, Charles, when she was 16 presumably because taking care of one husband was easier than a bunch of kids. Of course, she then proceeded to have five kids herself, most of them born in the grips of The Great Depression.

As I’ve wandered down this flour-and-bacon-grease-splattered memory lane, I’m struck by how the language of recipes changed even in the short years spanned in my grandmother’s recipe box. Some of the recipes she wrote or collected from friends were little more than ingredient lists with a couple of notes. Everyone understood the language of the kitchen. One of her recipes starts, “Kill and clean two good-sized chickens.”

She died in 1979, ahead of a world filled with arugula, sun-dried tomatoes and truffle oil. Yet, she also fell somehow ahead of the curve. She lived seasonally and organically for most of her life not because it was trendy or she worried about climate change or felt dissatisfied or disillusioned with her options at the supermarket. She grew up poor, so it wasn’t a choice. Up to the day she died at the untimely age of 69, she grew the vast majority of her vegetables. She and grandpa canned every autumn. They didn’t believe in store-bought jelly. When grandpa was alive, he grew his own pigs and made his own ham and bacon. They raised chickens and taught my mom at age 11 how to kill and clean them.

As I work through trying to recreate these dishes, as much as I long for a taste of the past, I have to admit how much I’ve been influenced by the present. That stewed chicken I loved so much as a kid? It tastes so bland to me now. More than once I’ve wondered, does every dish really need paprika? I’ve found myself adding garlic and cayenne, a hit of lemon or sprigs of fresh herbs to bring the flavor in line with the palate that I have now.

Which leads me to a dilemma. Do I present the recipes as I think they were made originally without any changes? Or do I adapt to modern palates? I think my grandmother would have loved garlic – she just never used it growing up, so it stayed in her blind spot. Sure, she made cakes with mayonnaise. But is that helpful or interesting, or just a culinary anachronism? Just what I am to do with those Campbell’s Soup-based casseroles?

When I wonder all of this, I think back to this recipe and to the spirit of my grandma, an outspoken pragmatist who herself was never a slave to a recipe. After all, for 26 years Inez lived in a remote town where the nearest store was a dozen miles away – and she never learned to drive. She could only cook with what she had on hand. Plus, she felt it a sin to let food go to waste. How else to explain minced rhubarb in a chocolate cake? Or sweet potatoes in chicken stew? Or that despite calling for butter, she made virtually everything with the bacon grease she kept in a coffee can on the back of her stove?

If I presented this dilemma to her, I know exactly what she’d say. “Really, Kathleen Inez, have you nothing better to do? Then go sweep the porch.” She’d shove a broom in my hand and send me out as she finished dinner the way she always cooked: A bit of this, a bit of that and a fistful of green beans leftover from last night and why not just throw in that extra gravy? Grandma was not a chef, but she a real cook. She was driven by love and economy, and in neither could she afford to be a purist.

*** Here is more information about Kathleen and her work —

“This could be the most important book you’ll ever read.” – Morgan Spurlock

“Like Julia Child before her, Flinn aims to demystify rarefied culinary know-how and bring basic cooking lessons to the simplest level…” – Publisher’s Weekly.