Skip to Content
Home Writings Once Upon A Story... Dishing Up Virginia By Patrick Evans-Hylton

I was going to tell you all about this scrumptious book, Dishing Up® Virginia: 145 Recipes That Celebrate Colonial Traditions and Contemporary Flavors, by Patrick Evans-Hylton and then I thought, well, I should just share the endorsement that I wrote for the book since that says it all!!

Monica Bhide on Dishing up Virginia: I have lived in Virginia for the past ten years and have fallen in love with it. This book has made that love deeper. It is filled with delightful recipes, rich history and reflects the true spirit of this state: love.  I love that Patrick showcases the state’s culinary heroes (people and peanuts!) throughout the book. My kids and I fight over the popcorn with pecans! The Virginia Sea Scallops with shallots and walnuts is comforting and so simple to make. I am honored to be a part of this terrific book. 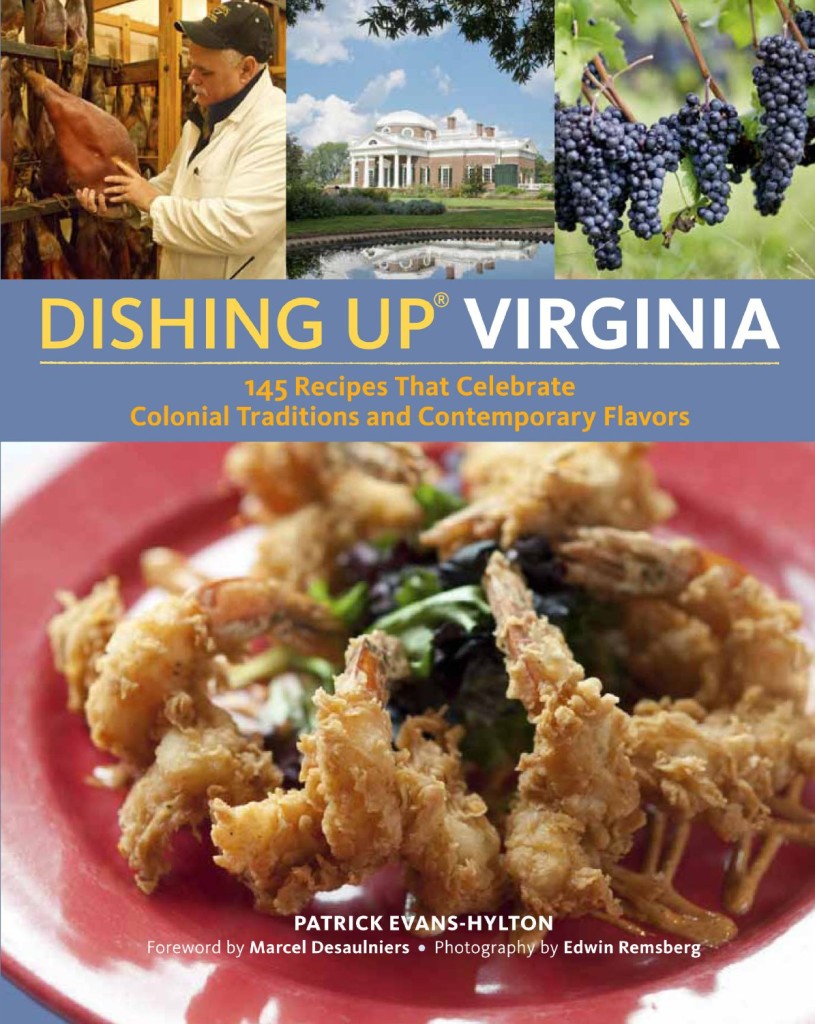 By Patrick Evans-Hylton from his lovely book ” Dishing Up Virginia”  (Storey Publishing, April 2013)

Although this wine-based punch is Spanish in origin, it was not an uncommon libation in Colonial Virginia. In the eighteenth century, wine was imported by the barrel and transferred by tavern staff into bottles for table consumption; rarely would individual bottles have been shipped. Wine was enjoyed unadulterated and in cocktail mixtures. Colonists enjoyed mulled wines — concoctions made by adding spices and sugar to wine and heating it. It was believed that mulled wine had certain medicinal properties to it.

Punches made with whiskey or fruit brandies were popular with the gentry, as was wine punch or sangria. “Sangria is mentioned in the early eighteenth century,” says Frank Clark, supervisor of Historic Foodways at Colonial Williamsburg. “It was served in taverns a lot. The tavern owners could cut costs by adding water or fruit. Also, adding wine to a punch or using it with mulling spices helped mask some of the wine’s quality. The wines traveled a long way, and while they could be pretty forgiving, they could also get a bit vinegary.”

1. Make the simple syrup. Combine the water, sugar, peppercorns, cloves, cinnamon, and orange zest in a medium sauce-pan and bring to a boil over medium-high heat.

2. Reduce the heat to low and simmer for 15 minutes. Remove from the heat and let cool completely. Strain out and discard the solids. Refrigerate until ready to use or up to 2 months.

3. Make the sangria. Stir the wine, ¾ cup of the simple syrup, the Grand Marnier, and vodka together in a large glass pitcher and chill at least 1 hour (overnight is fine).

4. Add the blueberries, cherries, figs, and plums to the pitcher and chill for 1 hour longer. Taste the sangria and adjust sweetness with additional simple syrup. (Reserve any remaining simple syrup for another use.) Serve immediately.

¼ cup Calvados or other apple brandy

3 peaches, pitted and cut into eighths

1. Make the simple syrup. Combine the water, sugar, grapes, peppercorns, star anise, lemon zest, and lime zest in a medium saucepan and bring to a boil over medium heat.

2. Reduce the heat to low and simmer for 5 minutes; remove the star anise and mash the grapes gently. Simmer the syrup for 10 minutes longer. Remove from the heat and let cool completely. Strain out and discard the solids, mashing the grapes to extract any retained liquid. Refrigerate until ready to use or up to 2 months.

3. Make the sangria. Stir the wine, ¾ cup of the simple syrup, the vodka, and Calvados together in a large glass pitcher and chill for at least 1 hour.

4. Add the raspberries, strawberries, peaches, apples, lime, and lemon wedges to the pitcher and chill for 1 hour longer. Taste the sangria and adjust sweetness with additional simple syrup. (Reserve any remaining simple syrup for another use.) Serve immediately.