** This story has appeared in NPR’s Kitchen Window ***

While I prefer using fresh or frozen corn, in many parts of India, corn also is dried and then pounded into a coarse powder. This coarse powder or flour is mixed with spices and used to make the popular makkai ki roti, a type of griddled corn bread. Fresh corn is used in salads, eaten on the cob with spices and used in breakfast dishes such as corn upma in which it is cooked with grains and vegetables. One of the most popular uses is in sweet corn chicken soup. When I was a child, it was served in our house at least once a week, and now I make it for my own kids at least once a week: Saute onions, add a touch of ginger and loads of chicken stock, a can of creamed corn, sliced scallions, salt and pepper. When the soup comes to a boil, reduce the heat. Beat an egg and slowly pour it into the bubbling soup. It will become stringy as it cooks.

Corn does not, however, share the same popularity in India that it enjoys in the U.S. “We’ve never developed a process like nixtamalization [soaking corn in an alkaline liquid before using it] to unlock the nutrients and alter the structure,” Vikram Doctor, an editor at the leading IndianEconomic Times newspaper who frequently writes about food, gave as one reason. “Our makki ka atta [flour made from corn] is very different from nixtamalized masa, and since corn has no gluten, we can only make heavy breads, not lighter ones like tortillas. I think this is also an indication that corn is a relatively recent import into India, which is why we’ve never developed a parallel process.” While India is the fifth largest producer of corn in the world, the usage there is not that high because of competition from wheat, rice and other traditional millets.

One of my personal favorite ways to cook corn is to grill it. I husk the corn and grill the ears for about 10 minutes, turning them several times. Once it is grilled, I drench it with lemon juice and season it with cayenne andchat masala (an Indian spice mix that is tangy and salty — and to die for). Some friends swear that soaking the corn in water (still in the husks) before grilling it makes the kernels more tender because the extra moisture helps steam the corn kernels when placed on the grill. Sometimes I cut the roasted ears in half and remove the kernels with a sharp knife. These roasted kernels make a great addition to salsa, soups, stews, salads and cornbread as well as mixed into potato patties.

If it is too hot (or too cold) to grill outdoors, I baste the corn with seasoned oil (such as chili oil or a flavored butter) and roast it in a super hot oven (around 400 degrees) for about 5 minutes or so for a wonderful roasted flavor.

On my last visit to India, I happened upon a tiny food cart that was selling boiled corn kernels in cups. The vendor was seasoning it with chili, lime juice and butter. One taste and I was hooked. Now I have the best of both worlds: sweet golden corn with the spices of my childhood in India, and the gentle buttery goodness of life today in America. 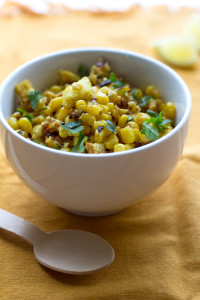 This simple recipe, adapted from The Everything Indian Cookbook

Photo by the lovely Sala Kannan