Skip to Content
Home Writings Once Upon A Story... Behind the Book: POK POK

J.J. Goode and I go back a long, long way.. ten years, at least. We both started out on eGullet, writing about our love of food. I have long admired him and his work. When I heard he had a new book, Pok Pok: Food and Stories from the Streets, Homes, and Roadside Restaurants of Thailand, I was thrilled. And after reading a review copy, I must say that the man has outdone himself. It is a book about real food, real people and truly terrific flavors. I asked him if he would tell us a bit about the book in his own words…. 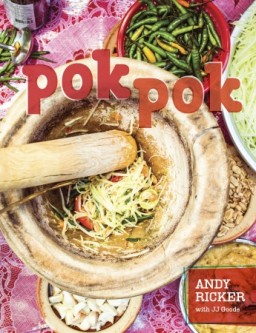 Behind the Book: Pok Pok

Hi, everyone! I’m thrilled that Monica asked me to share a recipe from a book I co-authored called Pok Pok: Food and Stories from the Streets, Homes, and Roadside Restaurants of Thailand, which released on October 29.

I’ve known Monica for a long time now, though I don’t think we’ve ever met in person. (Have we, Monica?) Ah, the magic of the Internet. We both used to post voraciously on a Web site called eGullet.org, back when she was an excellent writer who hadn’t yet been discovered by newspapers, magazines, and book publishers and I was fresh out of college and hadn’t yet discovered how to write a grammatical sentence. Monica’s writing has a strong voice and she has so much to share as a traveler and a cook. I, on the other hand, have found that I have very little to share myself, so I’m lucky that I happened upon a job that allows me to help other people share their stories. People like Andy Ricker, the man behind this cookbook.
Andy worked odd jobs–as a DJ, a line cook, a house painter–until he took a trip to Thailand that changed his life. He had already been to Thailand as a backpacker, but it wasn’t until he returned to visit a friend who lived in Chiang Mai that Andy had his revelation. On this trip, he was confronted by Thai food that he had never seen before, that he never knew existed. And he loved it. From then on, he kept coming up with reasons to go back to Thailand. He befriended home cooks, restaurant owners, and street vendors. He gradually taught himself to cook the food he fell for, never thinking he’d ultimately open a restaurant. Yet almost two decades later, he did. Today, his Pok Pok mini-empire includes seven restaurants, in Portland, Oregon, and New York. They all serve food you’d be hard pressed to find outside of Thailand.
What appeals to me most about the food he cooks is that he didn’t create any of it. He is not a chef in the sense that many of us have come to understand the term. Because while Andy cooks food few of us have ever eaten before, he is not an inventor but a proud imitator. He aims to replicate his favorite versions of dishes that already exist in Thailand.
This is true even for dishes like yam khai dao. Most Thai “salads” don’t resemble Westerner salads, aside from the fact that they tend to be served at room temperature and have a sort of “dressing.” Yam khai dao, however, does look very much like a Westerner salad. In fact, when I first ate it at Pok Pok, I assumed that Andy had made it up, that he decided to take a familiar combination of ingredients–lettuce and carrots and onion–and give it a Thai spin by dressing it with fish sauce, palm sugar, lime juice, and chiles. But as I learned after almost two years of working with Andy, that’s not how he rolls. If he serves a dish, you can bet that it’s something he ate at someone’s home or a market or a bus stop. You can bet that whether you like that dish (yam khai dao is very easy to like) or not (some of the food at Pok Pok does challenge our preconceived notions about Thai food), you’re seeing past the piles of pad thai and bowls of green, red, and yellow curries on offer at most restaurants in the States. You’re seeing the real thing. 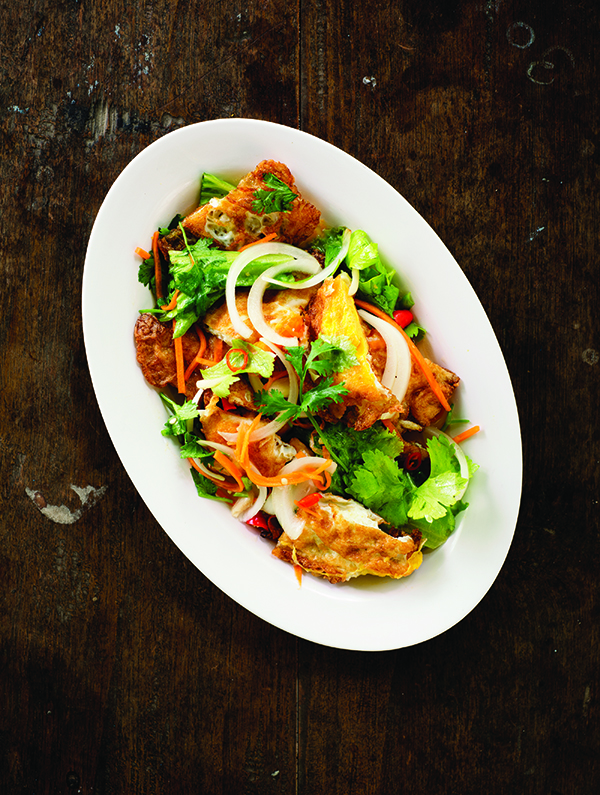 Serves 2 to 6 as part of a meal; the recipe is easily doubled

Heat a wok or nonstick frying pan over high heat, then add just enough oil to reach a depth of a generous 1/4 inch. Once the oil begins to smoke, carefully crack in the eggs (holding them close to the oil to avoid splatter) and decrease the heat to medium. The eggs should spit, bubble, and crackle wildly. The whites should puff and develop large transparent bubbles.

Once the whites get crispy and deep golden brown at the edges, 45 seconds to 1 minute, use a spatula to flip the eggs (try not to break the yolks, but if you do,it’s fine) and keep cooking until the bottom is golden brown and the yolks are set but still molten, 30 to 45 seconds more. Transfer the eggs to paper towels to drain. Discard the oil, then rinse and wipe out the wok and let it cool. You can fry the eggs up to 15 minutes or so before you make the salad.

MAKE THE DRESSING AND ASSEMBLE THE SALAD

Add the lime juice, simple syrup, fish sauce, garlic, and chiles to the wok, set it over medium heat, and heat the mixture just until it’s warm to the touch, 15 seconds or so. Turn off the heat.

Quarter the eggs through the yolks and add them to the wok along with the remaining ingredients. Stir gently but well, then transfer the salad, liquid and all, to a plate in a low heap, so that most of the herbs end up near the top, and serve.

Some recipes call for a dead-simple syrup made from palm sugar and water. You can easily double or quadruple the amounts.

Combine the sugar and the water in a very small pot or pan. Set it over medium heat and cook, stirring and breaking up the sugar as it softens, just until the sugar has completely dissolved. If the water begins to bubble before the sugar has completely dissolved, turn off the heat and let it finish dissolving in the hot liquid. Let it cool before storing. The syrup keeps in an airtight container in the fridge for up to 2 weeks.